One of my all time favorite shows is Descending. They go around the world scuba diving. (I live in Utah, and the nearest ocean is 12 hours away. I have to live vicariously sometimes.) On one episode they go to South Africa and they go to dive with the great white sharks. Later I saw a video of David Draiman diving with the sharks in Australia. I knew what my next adventure had to be. It was time to dive with the great whites.

It was really tough to decide where to see the sharks. Australia, South Africa and Guadalupe, Mexico all had their benefits. I figured Guadalupe was the best place for us to see the sharks. The water is clear, and you are on a boat for three days that is dedicated to diving with the great white sharks. I found a great deal with Nautilus Liveaboards.

We flew to San Diego to stay at a hotel. That night we went to SeaWorld, where I finally got to see orcas. They did a show for us. There was a spot that you could look through the glass and see them. The trip was off to a good start.

The next day we got on a bus that would drive to Ensenada, Mexico. At the border, I spoke with a really funny immigration officer. He asked me how many of us were going diving with the sharks. I told him 20. He then asked,” How many are coming back?” I told him two. He asked, “will you be one of them?” I said “yeah, I’m a faster swimmer than most of the people on the ship.” 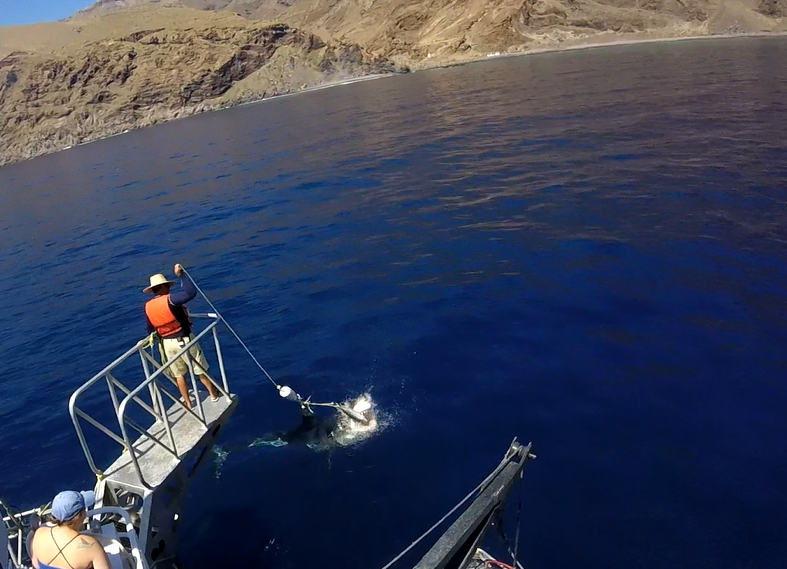 When we got to the boat, we were greeted with champagne and sushi. I ate the sushi and a healthy amount of dramamine. I wasn’t going to risk getting seasick. We still got seasick after that. After a day and a half, we got to Guadalupe, Mexico. Since the boat wasn’t moving, we didn’t have to worry about getting seasick anymore.

On August 16, 2017, we got to see our first great white shark. It was even more special because this was my wife’s and my nine-year anniversary. We woke up to the sound of a crane lowering the cages into the water: a perfect alarm clock for us. We got in our wetsuits and waited for the sharks to come. They had huge chunks of tuna that they started to throw into the water. We all jumped into the shark cages. We didn’t have to wait long for the great whites to come up to us. The shark looked me right in the eyes. It had a blue hue in its eyes. It wasn’t a soulless monster. It was more like the sharks were going to the zoo to see the silly humans.

The crew would throw the bait at the sharks, hooked to a string. When the shark got too close, they would pull the bait away. It was intense when the sharks got the bait. Some sharks picked up when the crew tugged the line with the bait, that the line was slacked, and would go for it. The crew would try to clear up the slack as quick as possible. The captain later told me the sharks are really smart. He said sometimes the sharks would go for the bait coming at the angle that would force the crew member to look at the sun. The shark would then go for it. Once we saw a shark jump right out of the water with the bait. 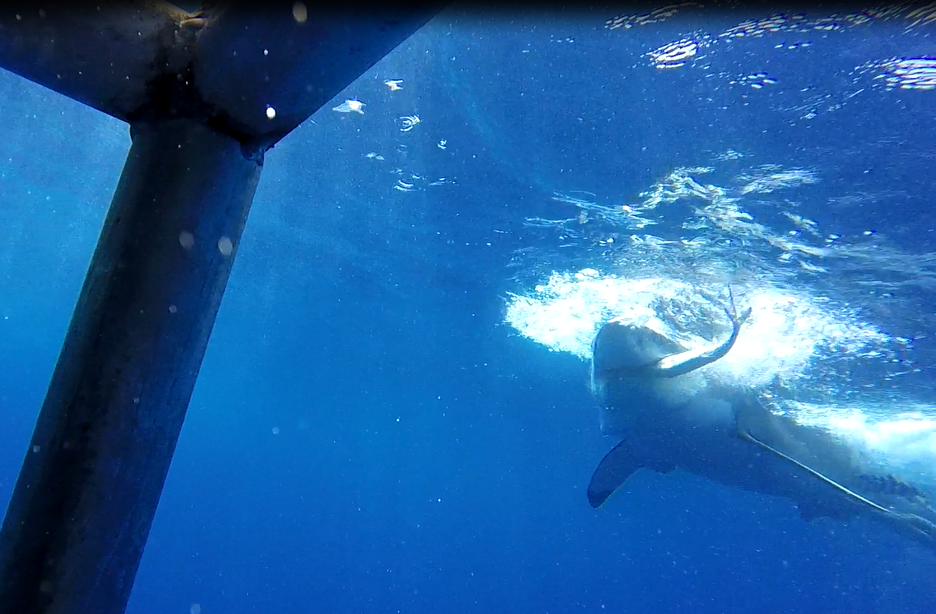 Around 5 or 6 PM, they would call the shark dive and pull up the cages. I was curious as to why they didn’t do the shark cages at night. Turns out that they were worried about cookie cutter sharks. He said a dolphin bore the mark of one, and some of the smaller fish did too. They were worried the sharks could hurt us. I laughed that they weren’t worried about a massive shark, but a shark that was really small. The great white was not feared. As a matter of fact, when the sharks swam up they looked like they wanted a hug. They had a big smiling face and the fins looked like they were in hug formation. I couldn’t tell them no. Multiple divers would go, did that shark look like it wanted a hug?

I gained the nickname “The Shark Whisperer” because almost every time I went in the cages, the sharks would show up. You had two options for shark cages. One at the surface, or one 33 feet below. It was great to see the sharks at the surface, but to also see them swim around the cage 33 feet below. On the second day, the visibility was so bad that you had to go down to 33 feet to see anything. You looked up, and it was blurry. Us divers did have a system to spot the sharks.  We’d either tap on the cage or tap each other on the shoulders to give out the sharks’ locations. 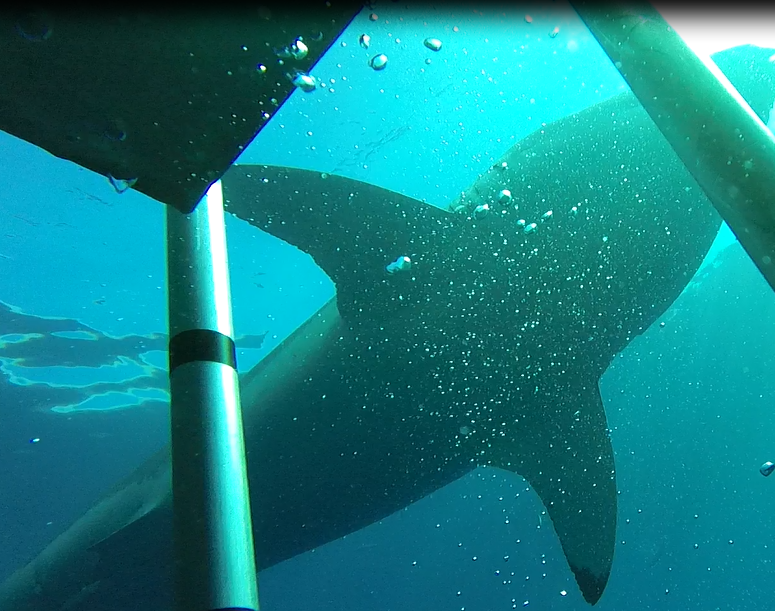 It’s funny, right now I’m writing this as my electronic photo frame is showing videos of the Great Whites, and my Border Collie asleep on my lap. This is what I call heaven. The sharks also had distinct personalities. We decided to name them. One was called Pimp Daddy because he had a posse of small fish swimming with him. He was a sloppy eater, and there would be fish junks for the smaller fish to eat. Another shark was called Scar. His pectoral fin had been bitten and was only left with half. There was a big shark we named Bruce. It was a huge shark. Then there was String. He had a piece of string dangling from its mouth. From that shark, I got the idea to take some of the rope that the sharks had destroyed, and keep it as a souvenir. I even have a great white shark statue with the string in its mouth, and I have some string that I put into a bottle.

By the third day everyone on the boat was good friends. I still keep in contact with them. We had people from all different areas of life. We even had a former Harley Davidson model who sent me a poster of his ad. We would watch Game of Thrones at night. Someone saw the Red Wedding for the first time. It was pretty shocking to them. The crew was great. We had one guy that made a throne out of a huge tuna. They would tell jokes, and make sure you were good. They were even concerned I skipped breakfast so that I could get with the sharks. They cooked tacos, really good pizza, and steak. It was amazing to see them.

Everyday my wife and I would chat with our kids about the trip. They loved hearing about the sharks. I think they also wanted to make sure we had enough life insurance that they could get all the toys that they want.

The last day of diving also had all the sharks show up. Sometimes two or three at a time. They ate the rest of the bait. It never got old seeing that. I loved seeing it from below. I even saw it from the surface. When the diving became too cold, I would warm up in the hot tub. After the third day of shark diving, we headed back. The seasickness was not nearly as bad.

We went back to San Diego. We took one of our new, really good friends to SeaWorld. It was fun seeing the sharks and having a new perspective on the sharks. We loved the sharks. We got the kids stuffed sharks. It was a great trip, and a heck of a way to spend an anniversary.

Seeing sharks becomes an addiction. They are so fascinating to see; I still go to my local aquarium and can watch the sharks for hours. I plan later to go to South Africa to see the great whites, and watch ragged tooth sharks. I want to go to Mandalay Bay and dive with the sharks. They have a lot of species of sharks in one place. I’d be able to cross a lot of sharks off of my list. Plus I get to wear a chainmail suit. How sweet is that?

I’m also going to see the largest fish in the ocean going to the Georgia Aquarium. I have always wanted to dive with the whale shark. I have no luck seeing any animal that has the name whale in it. In Hawaii, I dove off the wrong side of the boat. The other side had a whale shark. I did get to hold an octopus as a consolation prize. In Canada, I missed a whale coming out of the water because I was on the wrong side of the boat. In Hjalteyri, Iceland we were told there were a ton of whales in the bay. We came to dive the only divable geothermal chimney in the world. We spent the whole day and couldn’t see them. He even let us spend the night in his dive shop so that we’d have a better chance of seeing them. After the Strytan chimney dives, he took us around on the zodiak to see the whales. We didn’t see one whale. I figure at Georgia Aquarium, my chances of seeing a whale shark in an enclosed aquarium will be pretty good. You can never get sick of sharks. 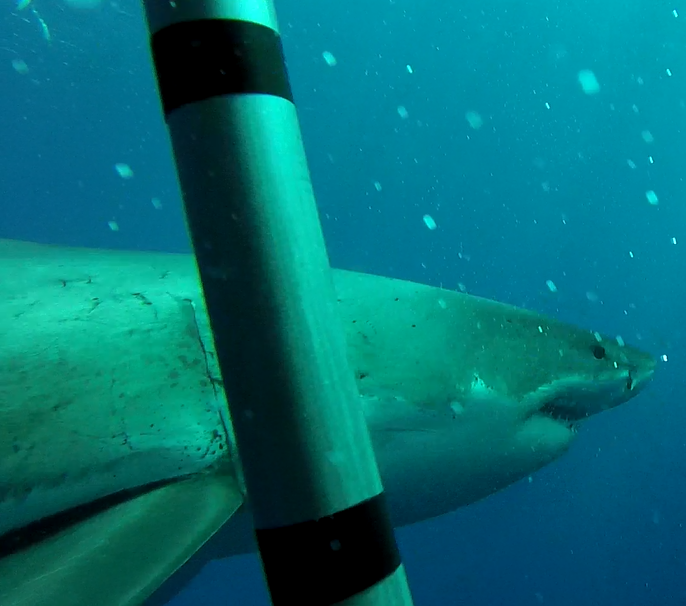 Most important of all is getting my kids on the shark dives with me and Eva. We had a proud moment where his Grandma was saying she wouldn’t want to go into a shark cage. My six-year-old, Calvin, quips,” sharks aren’t bad.” My mom said,”I guess you haven’t seen Jaws.” Calvin answered,”It’s just pretend. Sharks aren’t that mean.” We were way proud of him.