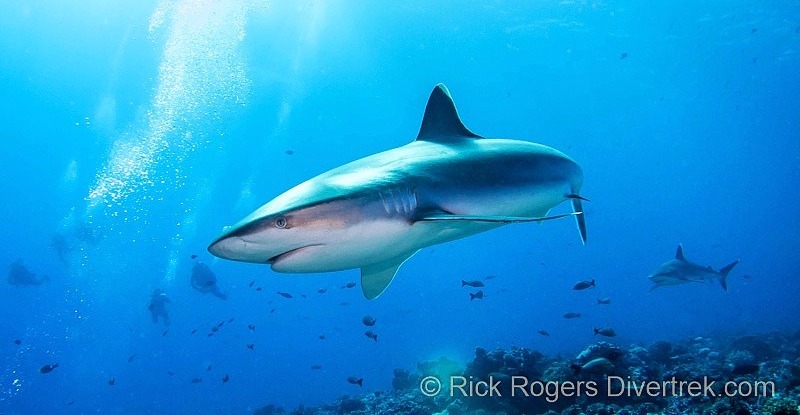 Rick is an avid scuba diver, underwater photographer, and an advocate for ocean conservation. His underwater adventures take him to beautiful places around the world where he goes the extra mile to see something different, learn something new, and challenge himself.  Anything that makes a nice composition is in danger of being photographed! 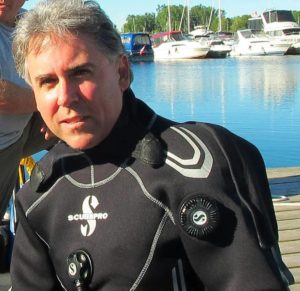 How did you become involved in diving and underwater photography, and how has it made a positive impact on your life?

Sometimes small doors do lead to large rooms! When recovering from a bad wrist injury that I received from kayaking, I watched Rob Stewart’s ground breaking movie “Sharkwater” at the theater. That was the catalyst that would help change the direction of my life. If I couldn’t be on top of the water for awhile, then I would learn to dive, and become a part of it. And if I was lucky, maybe even get to see a shark.

Initially I started underwater photography just as a means to record and show others what I saw. I love diving because there’s no other place where I can just be in the moment. It takes me to places that I wouldn’t otherwise go, meet interesting people, and learn about other cultures. 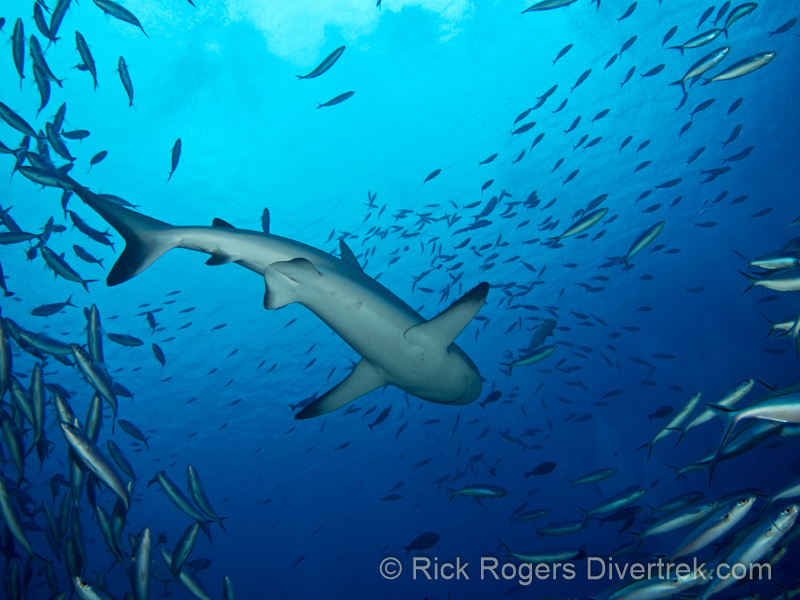 ​We just love your vibrant and lively photos of underwater wildlife. How would you like your photography and adventures to inspire people to take better care of the ocean and its inhabitants?

Thank you very much for your kind words. In the end, people will only protect what they care about, and that’s where I want to help others make that connection. I strive for a composition that invokes a response or an attachment from the viewer. I hope to show people how beautiful, interesting and fragile our underwater world is. And I also want to show how we are impacting on it. Recently one of my shipwreck prints is being used by the New York Aquarium show visitors the impacts of invasive Zebra Mussels here in the Great Lakes. Ironically, one of my shark images was used in a “Wall of Sharks” Tribute to Rob Stewart. 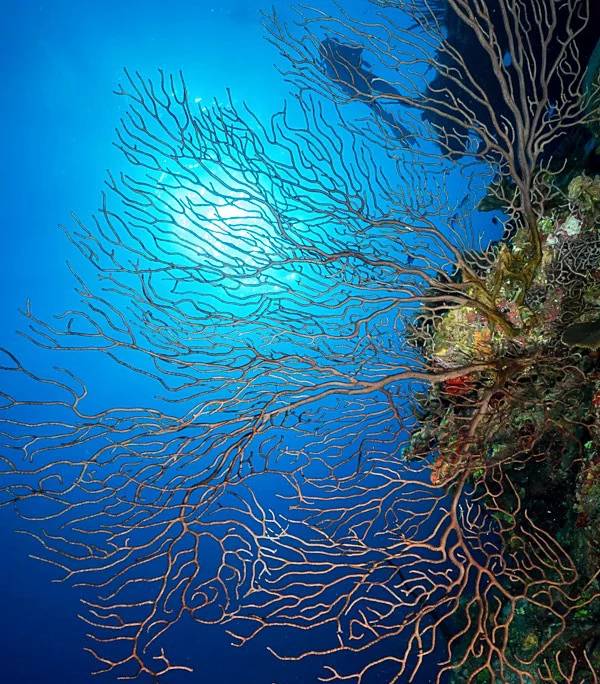 What would your advice be to people looking to make a difference in preserving our oceans and wildlife?

I support organizations like Sea Shepherd and the World Wildlife Federation (WWF). But it’s also about the little things that we collectively do every day-or don’t do- that have a profound impact. The single most important decision that we make every day is what we choose to eat. For example the farmed Salmon that are being raised in open net-cages in British Columbia is creating dire problems for the native Salmon stocks there. So much so that it has recently sparked an Indigenous occupation of several farms.  Reducing the amount of meat that we eat also dramatically reduces the green house gases that produce climate change. One kilogram of beef causes more greenhouse gases than a Transatlantic flight! 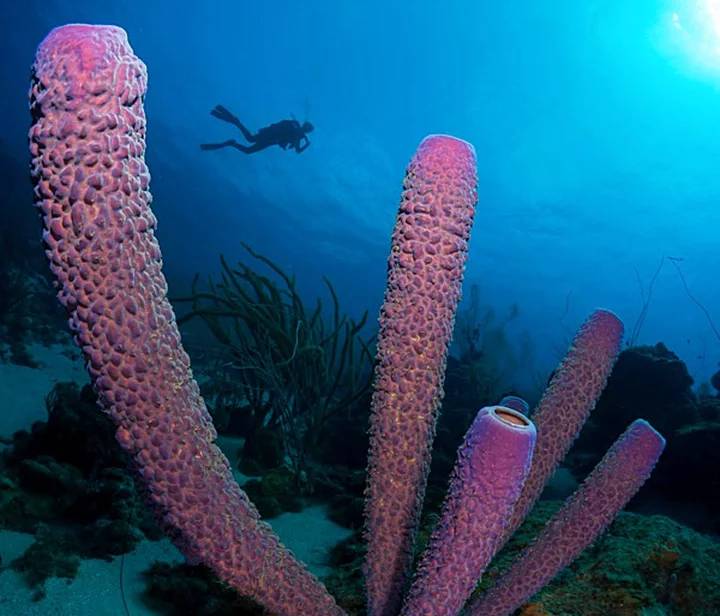 What has diving taught you about the ocean and its inhabitants?

I learned that the ocean is not a scary place at all. For example, I used to think – probably like most people – that sharks scour the oceans looking for people to devour.  But in reality, I had done over a hundred dives in the ocean before I even saw my first shark, a Lemon Shark. And even then it wanted nothing to do with me! I now consider any encounter to be a privilege, and a memorable and humbling experience.

​On a more somber note, I have also learned that we are so far away from treating the ocean the way it needs to be. I have seen first- hand the negative impacts of over-fishing, climate change, invasive species, plastic pollution, and over development. The ocean has limits, and we are rapidly approaching them. 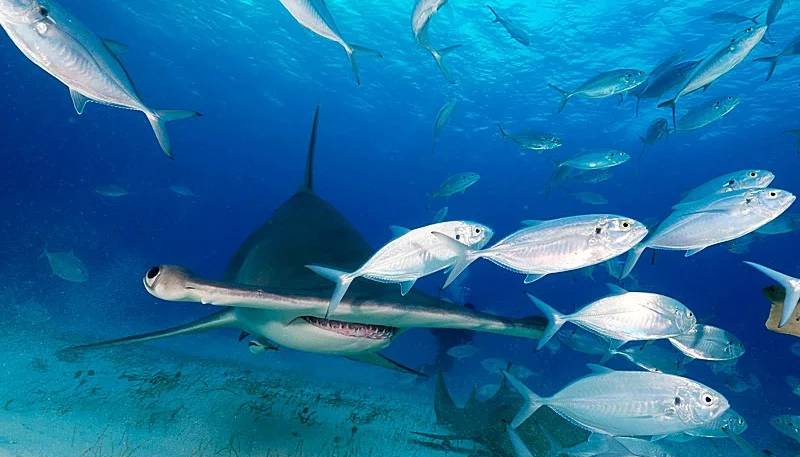 Where are some of your favorite diving spots?

My favourite diving is in British Columbia, Canada, particularly at the Northern end of Vancouver Island at a place called “God’s Pocket”. Jacque Cousteau once called the Island “the best temperate-water diving in the world and second only to the Red Sea.” And it still is. The amount of life, colours, biodiversity and breadth of experience is astounding. And it’s not dived as much owing to the cold water and harsher diving conditions. ​

The Caribbean is another spot that I frequent, partly because it’s close to me, even though it’s having a tough time. But social media is so saturated with images from the Indo-Pacific region these days that it’s actually refreshing to do something different from the Caribbean. This area also depends on tourism which reciprocates to protect the reefs. 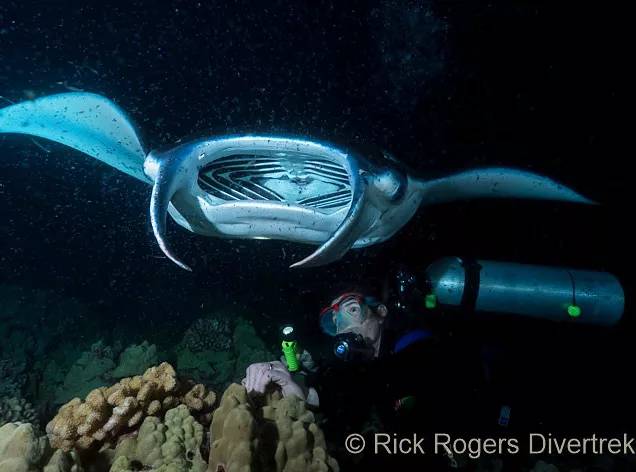 What kind of gear do you use, and how do you try to capture the perfect shot?

I currently shoot with an Olympus OMD EM1 camera in an Aquatica aluminum housing with dual YS-D1 Strobes. I like both macro and wide-angle photography, but I’ve developed a real love with close focus wide angle photography (cfwa) with a fisheye lens because of the dramatic depth perspective that it produces, and it’s easily relatable to nondivers.

​Capturing a great image begins before you even hit the water.  Talking with guides and other divers about subjects, becoming familiar with an area, and repeatedly diving a chosen site are key to me getting the best shots. 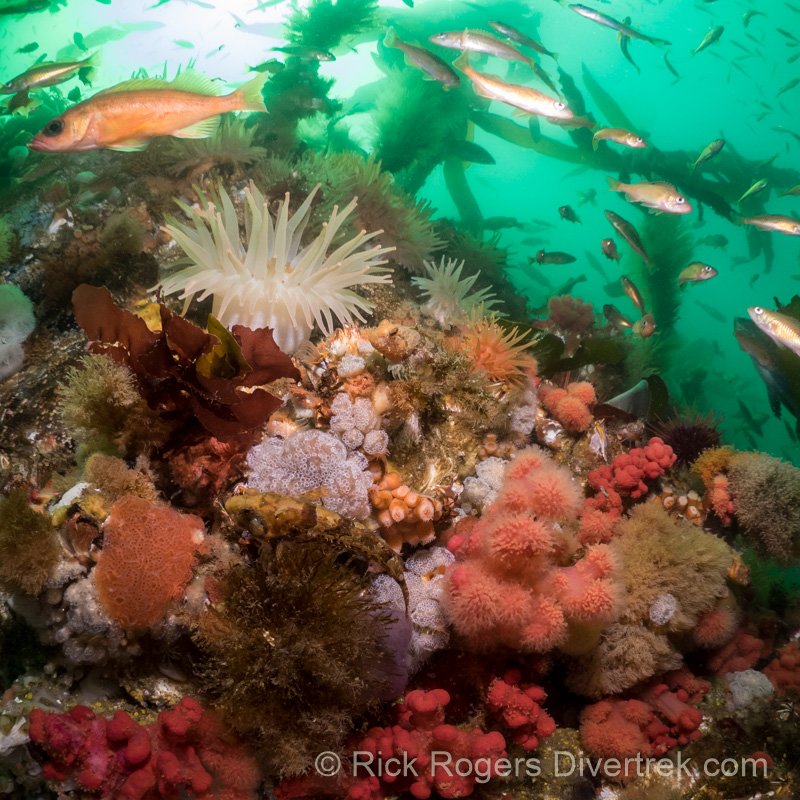 What are some of your favorite marine animals to capture, and why?

I most enjoy interactions with underwater life- having an interspecies conversation of sorts-so I love photographing anything that is capable of returning my curious gaze. But I also enjoy photographing small but beautiful sea slugs called nudibranchs. They’re often referred to as the “butterflies” of the sea, since they come in unimaginable combinations of vibrant colours, textures and forms. And they’re still discovering new species. 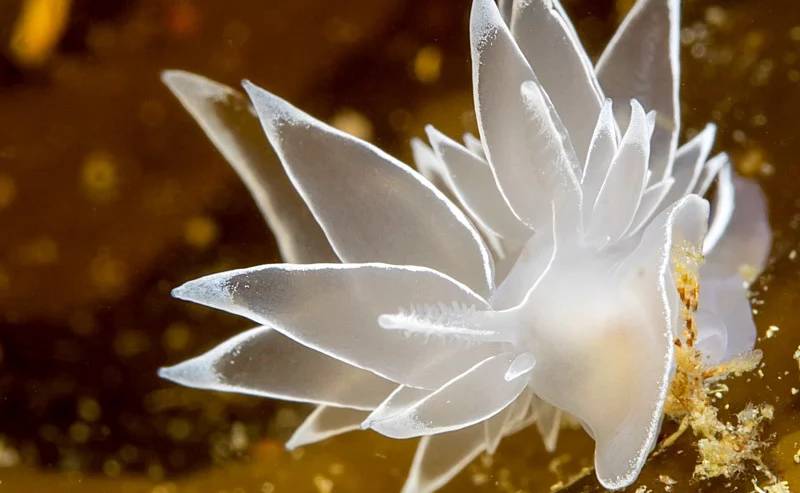 What are some of your most memorable encounters or dives?

That’s easy! Galapagos Islands in Ecuador. The diving conditions there weren’t easy, and most times you  had to work for everything, which made it all the more gratifying. On one occasion a rogue wave smashed out one of the lower port hole windows on our ship!

Probably the most memorable dive of my lifetime occurred there at Wolf Island. A handful of us were doing a blue water drift dive, just flowing with the powerful currents that are normally there. Out of the hazy blue distance a school of hundreds of Hammerhead sharks started to materialize, and we were on a direct collision course with them! There were a few tense moments of anticipation.  But the sharks just opened up their school, let us pass, then closed ranks behind as we passed through. There were sharks in every direction you looked. I was so mesmerized that I forgot that I had a camera in my hands. For a brief moment, I like to think that I was a member of a Hammerhead school. 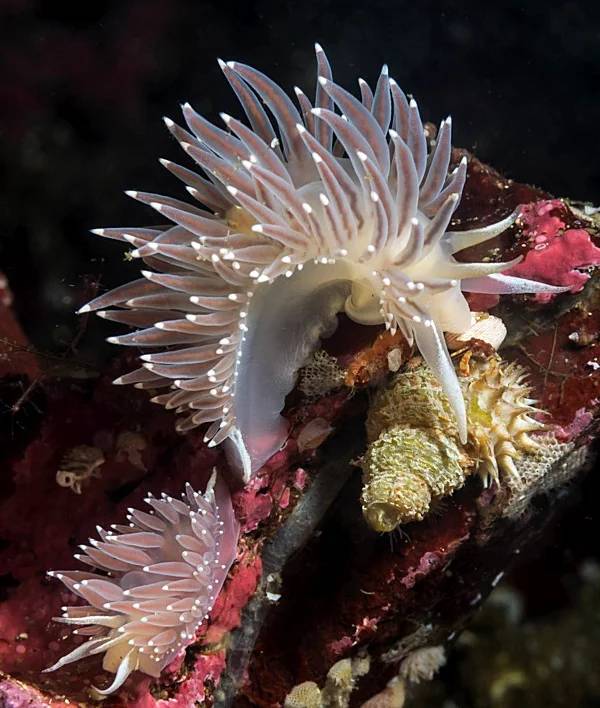 Where are some of your “bucket list” dive locations?

I dream about snorkeling with the Orcas in Norway, the corals and sharks of the southern Red Sea, and the Humpback whales of the Silver Banks.

Who do you look up to and how does this person influence your sense of adventure?

Rob Stewart, as I mentioned earlier. I like the inspirational works of the underwater photographers David Doubilet and Brian Skerry.

We at This Adventure Life want to inspire our readers to get outside and live a life of adventure, exploration and pursuing their passions. What would your advice be for someone who wants to live fearlessly and pursue their wildest dreams?

Early on I was motivated by two quotes from Anais Nin, which I can cite off the top of my head: “Life expands or shrinks in proportion to one’s courage” and “And the day came when the risk to remain tight in a bud was more painful than the risk it took to blossom.”

​I wanted to, as Emile Zola once said, ”live out loud.” I was afraid that at some point in time, I would regret the things that I hadn’t done. I have found that great rewards lie on the other side of conquering your fears. 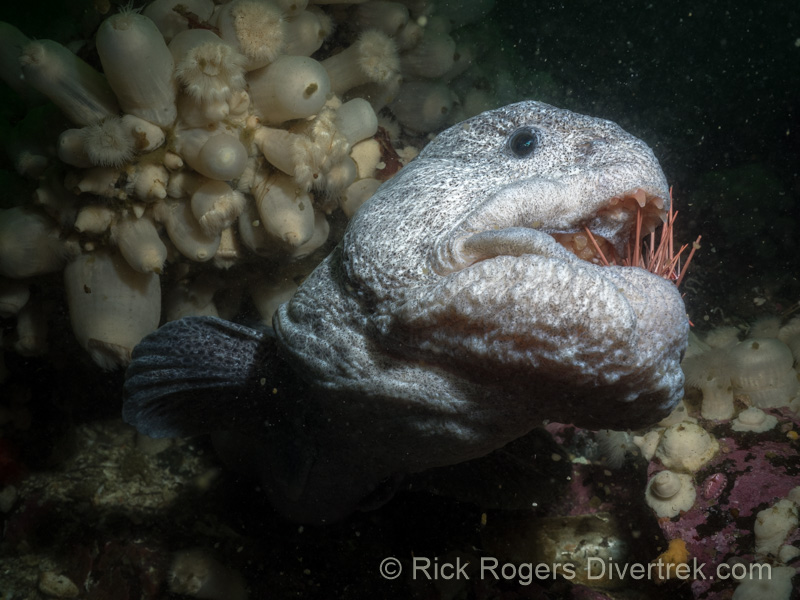 In the short term, the Dutch island of Saint Eustatius in the Caribbean. But with Hurricane Irma having recently battered the region, I may have to alter my plans! It’s one of the lesser travelled, and supposed to be one of the remaining jewels of the Caribbean-sharks on every dive, and beautiful, colourful reefs.

My summer  trip is back to British Columbia at God’s Pocket. I’m planning on diving the Nakwakto rapids again. They’re in the Guiness Book of World Records for have the fastest tidal currents in the world, so there is only a narrow window each month when they can be dived safely, and even then for only about 15 minutes of bottom time. I also hope to get in the water with the Salmon migrations that will be occurring that time of year.