One of five children, Jeanne Masley Stawiecki grew up in the factory town of Webster, Massachusetts. In 1971, Jeanne completed nursing school and married her high school sweetheart. She enrolled at St. Vincent Hospital School of Anesthesia while continuing to work full-time. Two years later, she was awarded the Agatha Hodgin’s award for the most outstanding graduate nurse anesthetist.

When she realized that she couldn’t walk up a flight of stairs without struggling to breathe, Jeanne quit her two packs a day smoking habit and began to exercise so she would not gain weight. She joined a runner’s club and in 1993 she heard about the running of the 100th Boston Marathon. The idea of running the 100th Boston Marathon sparked her to qualify. Although Jeanne had been running only twenty miles a week, she decided to try entering the NYC Marathon to qualify for Boston. She soon learned that she had been accepted to run in the 1994 New York Marathon. In 1994, at 44 years old, Jeanne finished the NYC marathon in 3:36, qualifying for the Boston marathon.

After running the 99th Boston Marathon in 1995; another six consecutive Boston Marathons, including the 100th; and sixteen years of running, she wanted something more. She planned a trek to the Himalayas, traveling alone to meet a group of strangers who had all booked the same tour in Katmandu. The trip was a huge success and now Jeanne had found a new passion: Mt. Everest and the Himalayas.

In 2002 Jeanne took a technical mountaineering course in the Pacific Northwest with Alpine Ascents International, a climbing company from Seattle, Washington that specialized in guiding the Seven Summits. She signed on for the first of the seven, climbing Mt. Elbrus in Russia in July that same year.

In 2003 and 2004 she summited Denali, Vinson Massif (Antarctica) and Aconcagua (Argentina) using her running to endurance train for the climbs.

On March 29, 2007, Jeanne returned to Mt. Everest to complete the one climb that had eluded her. She took the South Col route with Alpine Ascents International and on May 22nd at 7:10 a.m. she reached the summit of Mt. Everest, fulfilling her dream and completing her quest to summit the highest peak and complete marathons on each of the seven continents, unofficially becoming the first woman to do so. At the age of fifty-seven Jeanne earned two Guinness World records for her achievements.

Can you tell us what motivated you to make the drastic change in your life, and what inspired you to become a marathon runner and mountaineer?

One day, a day I will never forget, it was as if I suddenly woke up and realized time is precious and in two years I’d be turning forty. My life was working—every vacation, every weekend—and never really getting out of debt. It was as if I had lived my life on auto-pilot. Days, weeks, years went by and nothing really changed. My experiences as a child made me feel unworthy and shackled me with do’s, don’ts, can’ts, won’ts and will-nevers that I just accepted as my life’s agenda and never questioned. Of course when it came to work and responsibilities, none of that applied. But at 38 years old I felt a sense of urgency. I knew if nothing changed in my life, I would never get the chance to know what I may have been capable of if only I hadn’t been so afraid to try. I hated all the excuses I had made over the past several years and made the decision right then that I would start by giving up smoking- the rest “as the say” is history. 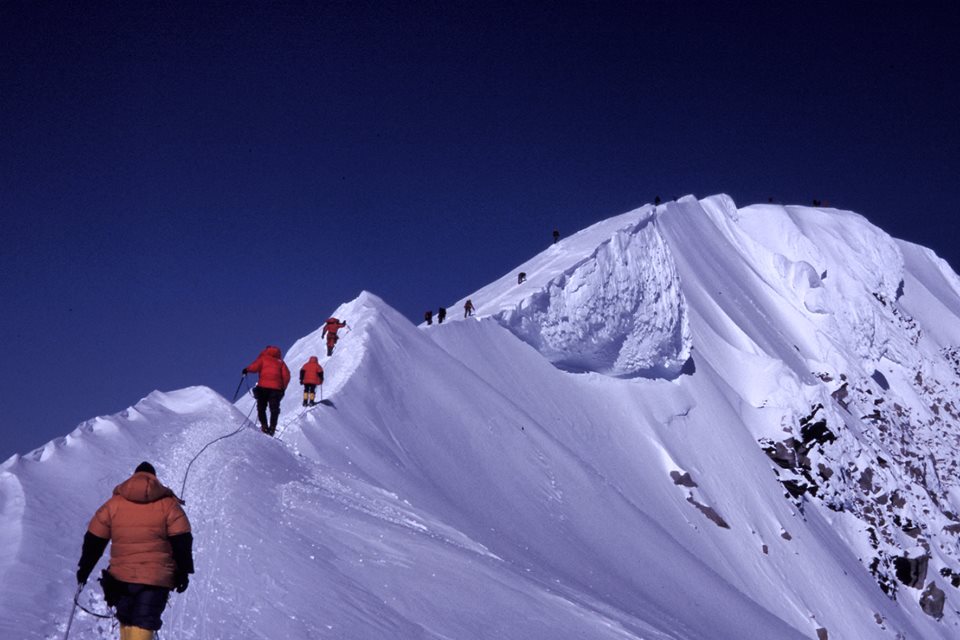 What are some of the obstacles you encountered during your journey, and how did they make you stronger?

After being medically evacuated with my first attempt on Everest, I returned home with a “breathing disorder” that was so severe I couldn’t work, couldn’t eat without choking, couldn’t talk easily and certainly couldn’t even begin to think about ever running or climbing again. The doctors had recommended a temporary tracheostomy to help me with the “work” of trying to breathe. I was worn out and felt I had nowhere to turn for help, or so I thought…. I never would have believed it initially, but this obstacle was a gift. It forced me to look for answers where I never would have expected to find them. So many times in my life it was the obstacles that led to my greatest growth. What I learned led to my greatest achievements—two Guinness World Records and at the ripe old age of 57. I became the first woman in the world to both run marathons and climb the highest peaks on all seven continents!  The real power to change the course of our lives exists in every individual and it is omnipotent – I  can attest to that! 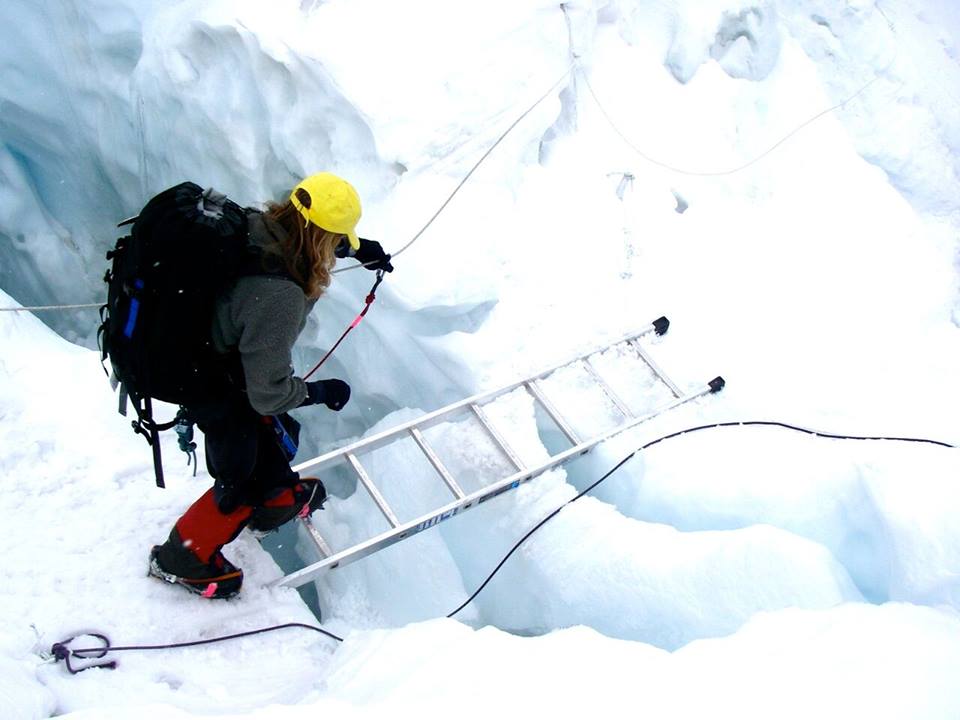 ​How did you decide to not only run a marathon in all seven continents, but summit the highest peaks as well?

I had successfully summited Kilimanjaro in August of 2006 and was so elated to have been able to climb without experiencing any breathing difficulties, I decided I would climb Kosciusko in Australia. I had this pressing thought that as long as I was going to travel seventeen hours to Australia, I should run a marathon there. One thing this last obstacle taught me was the difference between ego, fear and intuition. I found a marathon in Melbourne, but it wasn’t during climbing season and all the guides were already taken, leading fishing trips, kayaking, etc. The feeling to do this marathon became so strong I found it impossible to ignore, so I went with my gut—what we call intuition—and signed on for the marathon. Once there it all worked out beyond my wildest expectations; especially since it was only within the past few months before Kilimanjaro, I had been able to run again and only for short distances. When I got home from Australia, while sorting through my mail I found something about a marathon in Antarctica. Intrigued I called Marathon Tours and Travel and inquired about signing on the next year. I was told there was a wait list and was getting ready to hang up when I was asked why I hadn’t responded to any e-mails they had sent about running. I told him I was busy summiting mountains and when I told him my goal-to climb the seven summits, he asked me to come in to talk with him. He told me about the possibility of getting a world record. He had started a group for runners called the seven continents, similar to the seven summits, but running a marathon on each of the continents. I must admit I was intrigued-especially about being able to receive a world record. And so, even though the “thinking inside the box part of me” told me this was nonsense before attempting my third climb of Everest, I again went with that gut feeling and signed on. 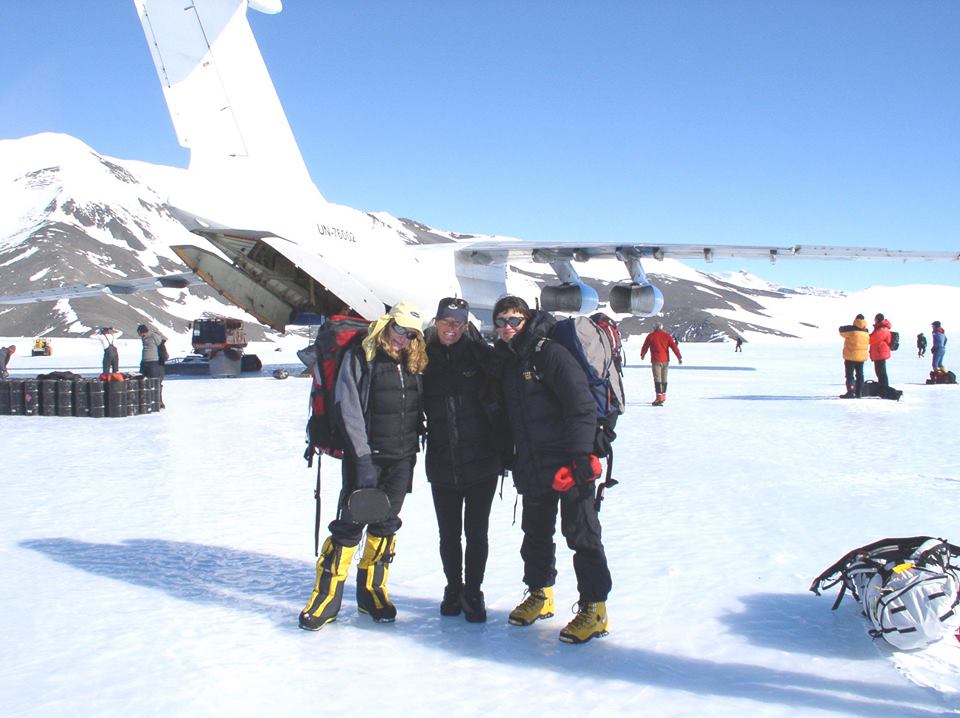 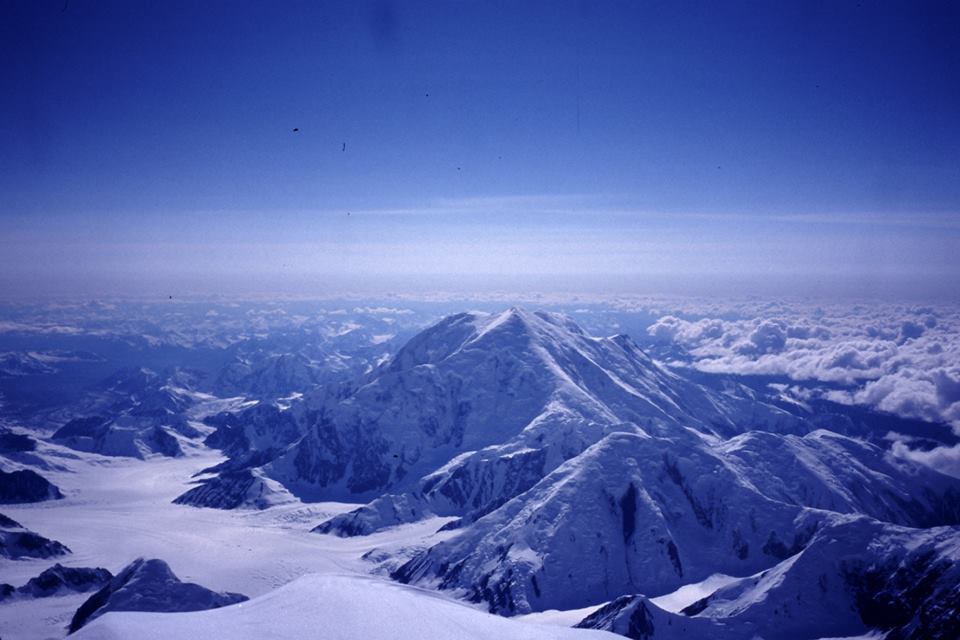 What is your most memorable summit to date?

That’s an easy one: Everest. It proved beyond a shadow of a doubt that everything I learned as a result of my severe breathing difficulties had been the reason I had finally succeeded. I have experienced so many challenges since my summit of Everest and each time the initial fear response pops up, I now reach for the stone I brought back from the summit of Everest and had made into a necklace and remember…

“Great men are they who see that spiritual is stronger than any material force – that thoughts rule the world.”
—Ralph Waldo Emerson 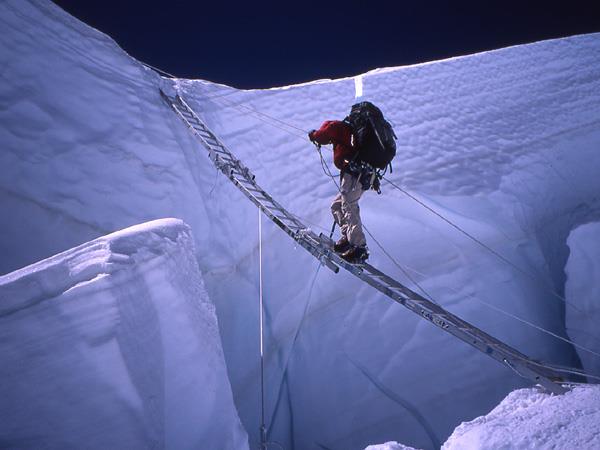 How did it feel to stand on top of Mt. Everest completing your goal and become a world record holder?

I didn’t realize I had qualified for two world records until months after the Everest climb. At Everest basecamp I learned the world record I had been hoping to achieve-running the seven continents in the shortest number of days had been achieved by another woman who had run in Antarctica with me. I found out much later I had broken the world record for running each marathon in the shortest aggregate time.

The second world record I didn’t know about until I gave my “stats” to the Seven Summits website and found I had been the oldest woman to complete the seven summits including Kosciusko. But, all that aside, the biggest thrill I ever experienced was standing on that summit knowing what it had taken for me to get there and all I had learned. Seeing the curve of the earth, the velvety brown mountains of Tibet, standing on the highest point on earth…my spirit soared…

How did breaking both records impact your life?

I hope to inspire others, as I have been inspired, to face their fears and dream big. The world records lend credibility to my story. The gift of our time here doesn’t come with a lifetime warranty. Every moment is valuable. Everyone can and will be able to, if they choose, to let go of the things, the attitudes, and the beliefs that hold them back – as I did. 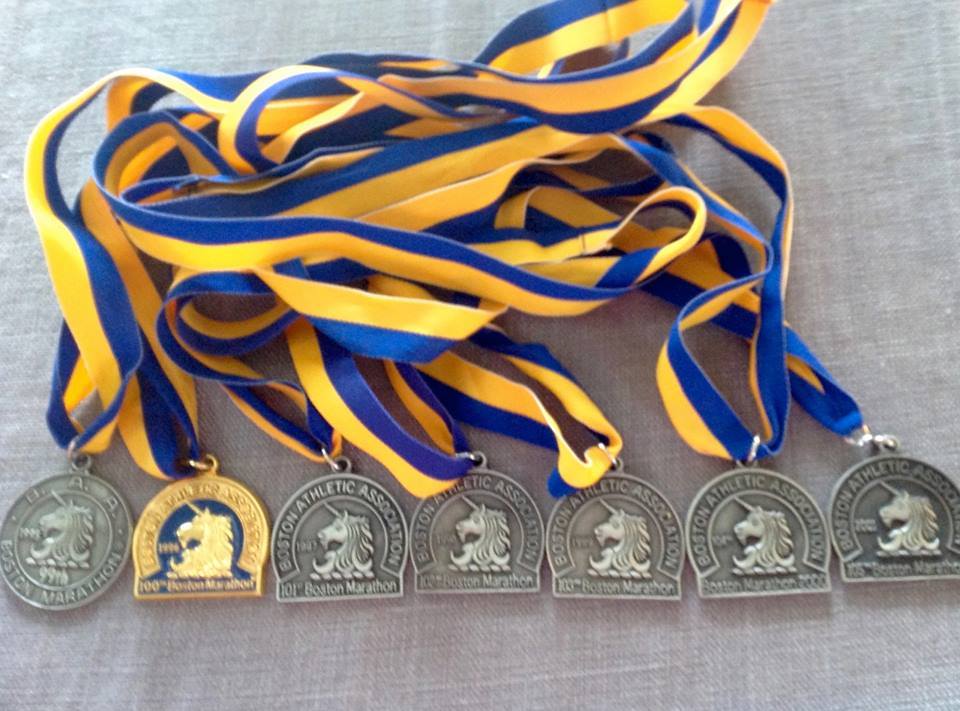 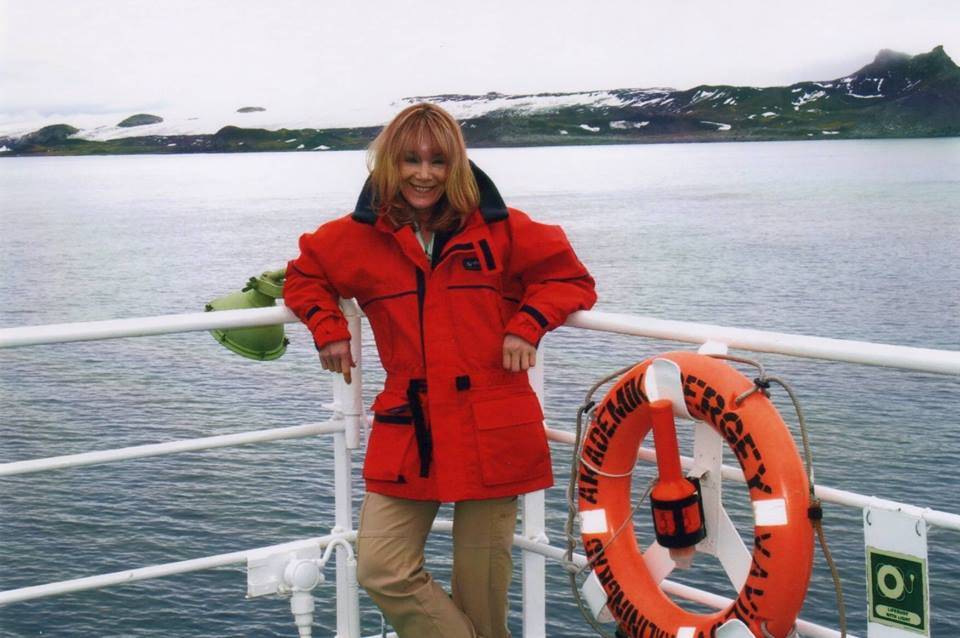 What draws you to the mountains? How does climbing serve as a metaphor for your life journey?

There is a transcendent quality to nature. I know everyone feels it when at the ocean, or on a trail deep in the woods. Being on the world’s highest mountains with all my senses primed for survival, without any of the accoutrements of civilization definitely changes a person. The mountains were my teachers.

They taught me more about my strengths and weaknesses than any other experience of my life. With climbing – as with life, it isn’t about the summit-it’s more about the journey to get there and what we learn along the way that will help us climb the mountains that seem to block our journey to the top.