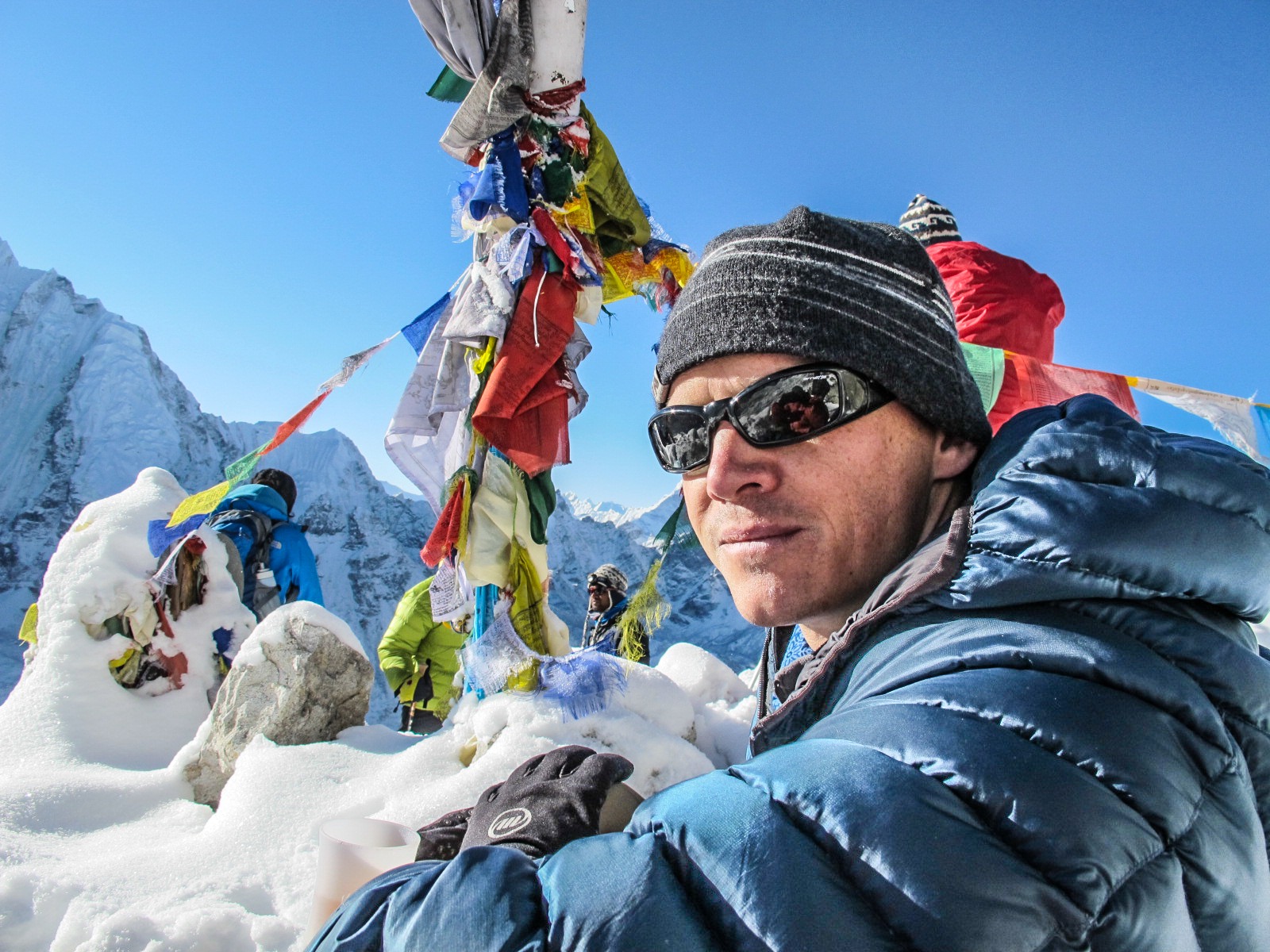 Brian served 6 years in the US Navy as an Air Rescue Swimmer/Combat Search and Rescue with 2 tours in the Gulf as a part of Operation Southern Watch. His passion for outdoor adventures brought he and his wife to the Pacific Northwest, where they live near the mountains with their 2 kids. Brian’s sort of a goal setter and enjoys a challenge. He’s traveled the world climbing each continent’s highest peak, including 3 expeditions on Denali. Brian has a solo summit of the highest mountain in the southern hemisphere (Aconcagua) and northern hemisphere (Mount Everest).

In 2011, Brian soloed the summit of Mount Everest, but then went completely snowblind on the descent. Hand over hand he made his way down blind and alone. What should have taken 3 hours to reach high camp, ended up taking him 7 hours. Brian took a major fall down the south summit and eventually ran out of supplemental oxygen, but through determined faith and focus he survived.

Brian’s experience has been shared across the world. He’s been featured on CNN, NBC, ABC, Fox News, Anderson Cooper, GMA, Success Magazine, Huffington Post and countless other news agencies. Several reenactments have been filmed, including CBN, NBC and the Weather Channel. Brian’s survival story is also due to release in an upcoming movie series produced by KingdomWorks Studios.

Brian authored the book, Blind Descent, published by Tyndale House Publishers, which recounts his story on Everest. Blind Descent has been on the Amazon best sellers list multiple times and continues to be one of the top selling Everest survival books. We had the honor of interviewing Brian about his journey. 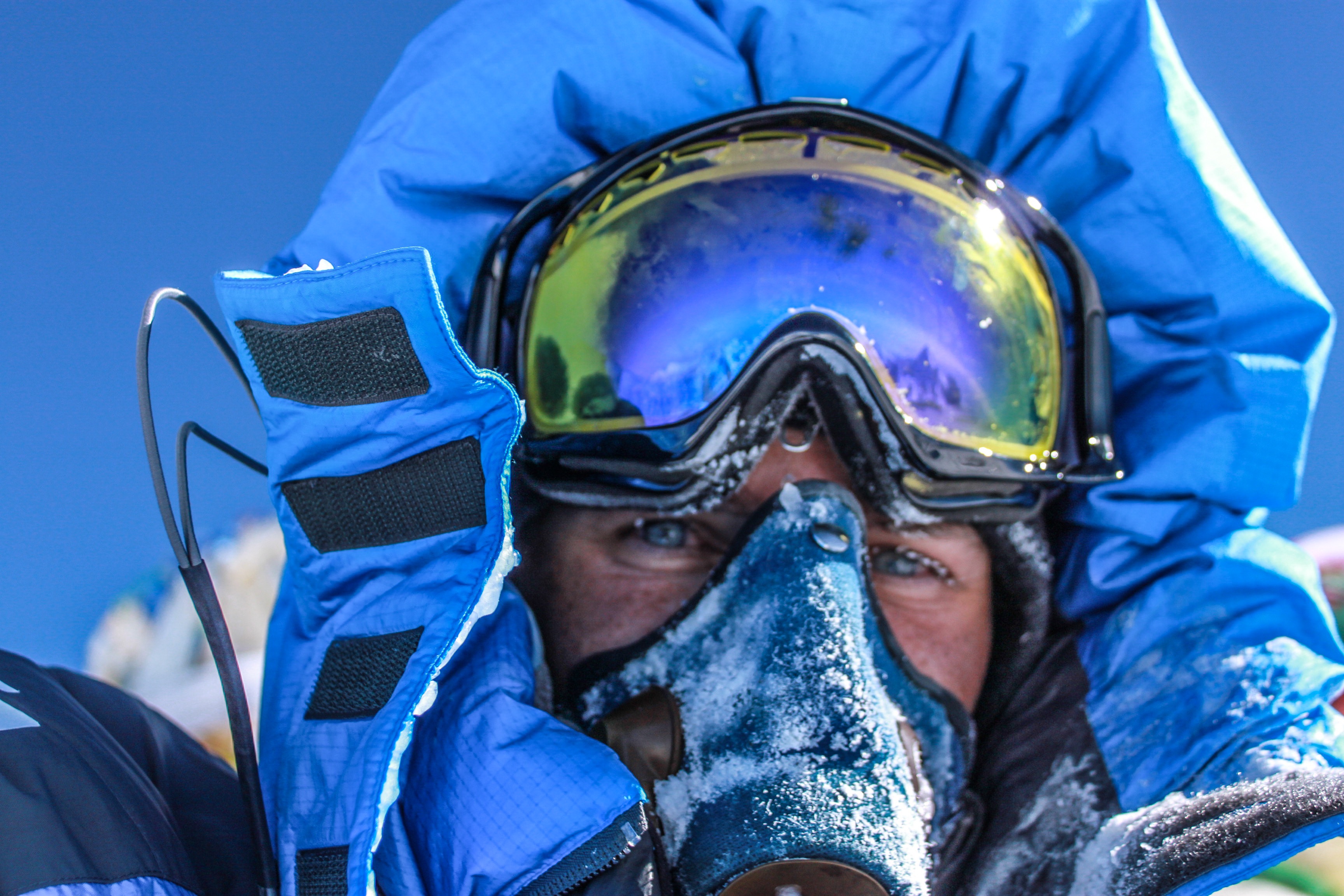 We are so inspired by your journey and adventures to the highest summits across the world. What inspired you to climb the Seven Summits?

I’ve always been wired for adventure, even as a young kid growing up in southern Oregon. I didn’t have the technology and social media distractions so I was always exploring the surrounding mountains and rivers. Jumping out of helicopters in the Navy was fun in my 20’s, but I decided to settle down a bit once I got married and finished graduate school. I quickly realized that suppressing my love for adventure made me less of who I was made to be. I then started mountaineering and set goals to explore the world. The 7 summits was the perfect audacious multi-year goal to inspire me to unlock my true potential. 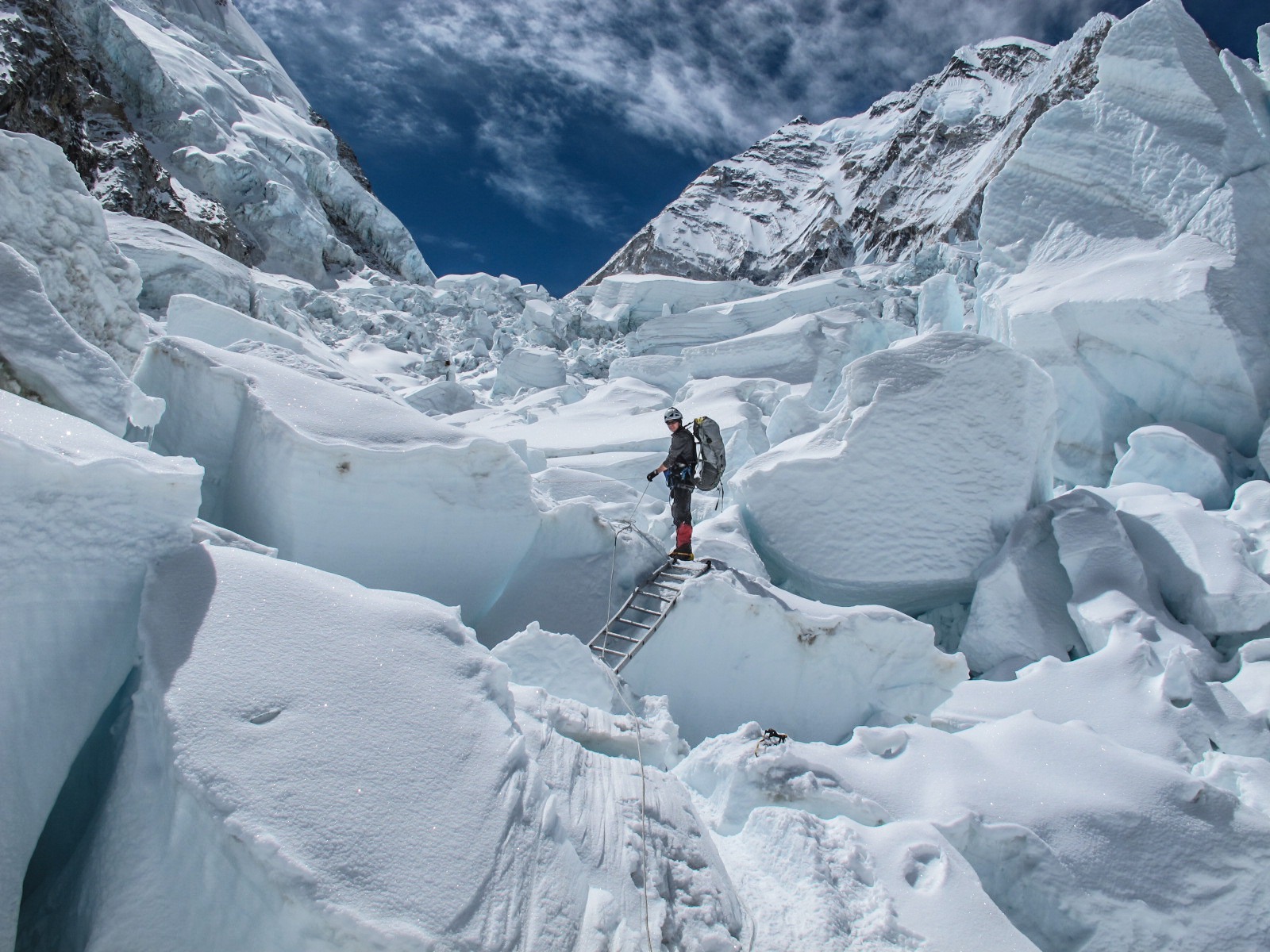 During your Everest trek in May 2011, your sherpa became ill and decided to descent around 1,000 feet below the summit. What made you continue the journey solo?

In the mountains, you live and die by your decisions. So, you try to make good decisions with the information you have at the time. I am very comfortable climbing alone, as I have soloed several peaks around the world. However, this was Everest and I would be completely alone. I weighed out the conditions like the weather and my ability.

But more importantly I had a conversation with Pasang to ensure he was safe to descend alone. He assured me that he was and was actually going to stay and wait at an area called the balcony. He ended up descending to the South Col and later I went blind on the summit. If I could have predicted the outcome I would have descended at that moment, but that’s not how life works out. Fortunately, I’m alive today. 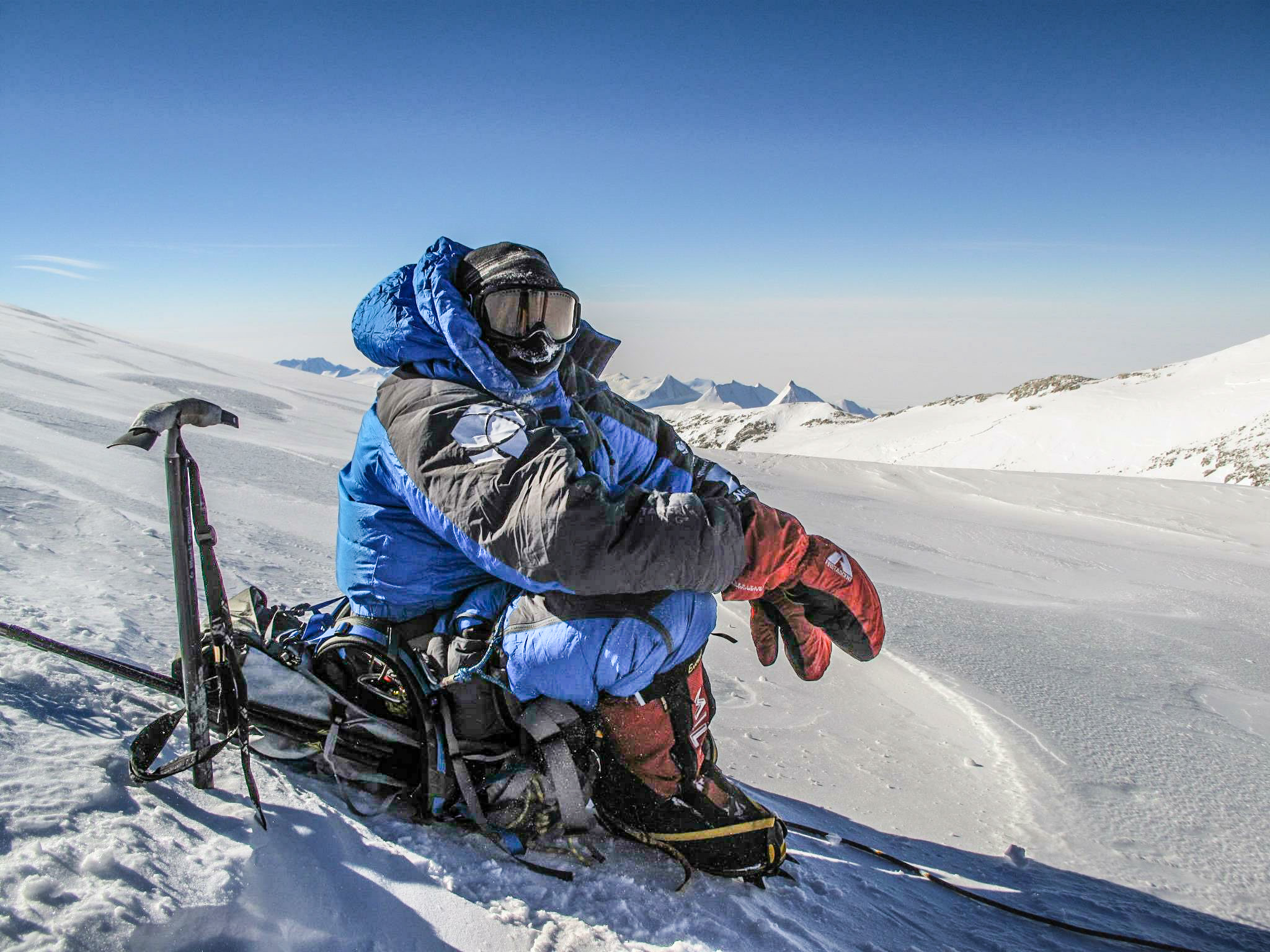 How did it feel to summit the world’s highest peak?

It’s a very surreal feeling to not only stand at the highest point on earth, but to have the whole summit to yourself.  It’s very rare and it took a lot to process in that moment. In fact, it’s something I will process the rest of my life.  I was tired, proud and emotional.  I sat there and just took it all in, before taking the highest possible selfie. 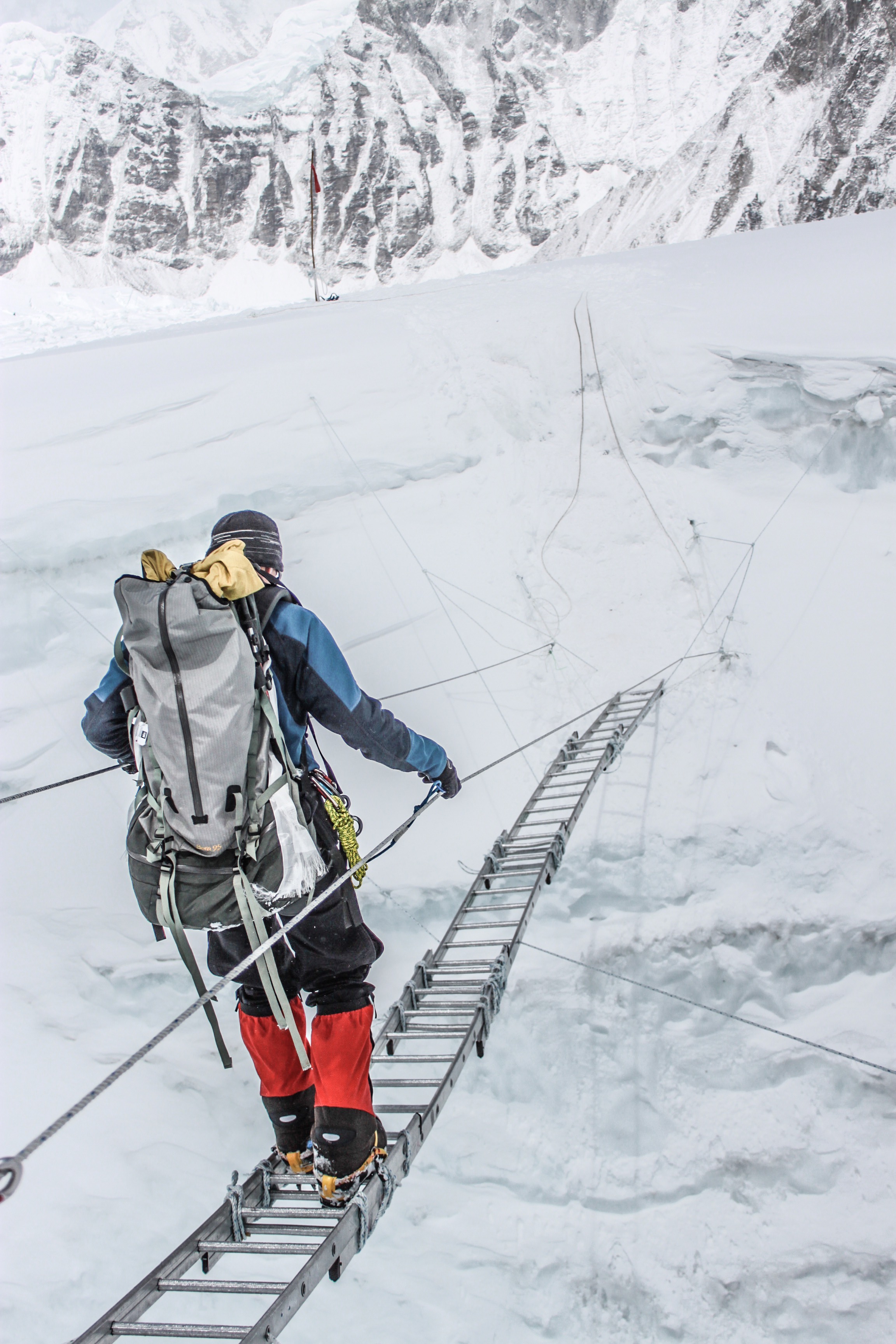 Can you describe what happened after the summit celebration? Once you became snow blind, alone and low on oxygen, what motivated you to descend?

It takes close 2 months to climb Mount Everest and you have less than an hour to spend on top. I took pictures, got some water and a snack and started heading down. That’s when everything went bright white. I had cracked my goggles the day prior, climbing up Lhotse Face. That and the extreme power of UV in the death zone, fried my cornea. It usually takes 24 hours to recover from snowblindness, I wouldn’t fully regain my eyesight for over a month.  In that moment, I remember assessing the situation, staying calm and using my other senses to take one slow step at a time to get down the mountain. It should have taken 3 hours to get to high camp, it ended up taking me 7. I had a major fall down the south summit and ran out of oxygen shortly after that. 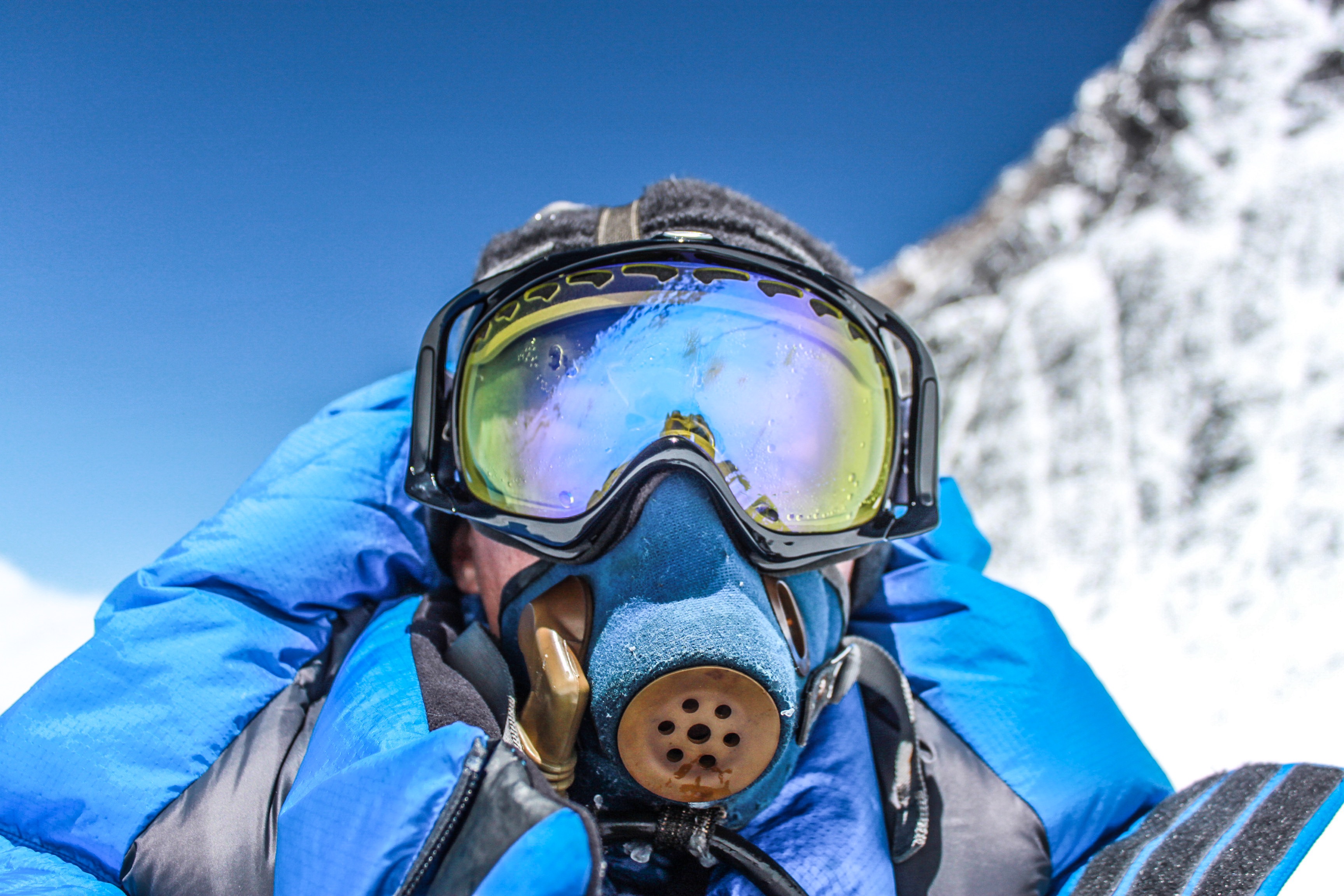 What was the descent like? How did you utilize your military training and faith to complete the descent and make it to safety?

Descending blind and alone from the summit of Mount Everest sucks. I don’t recommend it!

However, I never gave up my faith and focus. In my military training, we learned that panic kills and we were put in situations to teach us to remain calm in oxygen deprived situations. A lot of that came back instinctively. During the entire descent, I felt a presence around me; like someone was there. At 27000’ when I ran out of oxygen I had been climbing continuously for over 30 hours, from the day prior to that point. I was exhausted and dropped to my knees and surrendered to God. At that moment, I witnessed a miracle. I was lifted to my feet and an oxygen bottle that had previously failed started working. It was enough to get me back down to the South Col, where Pasang met me. 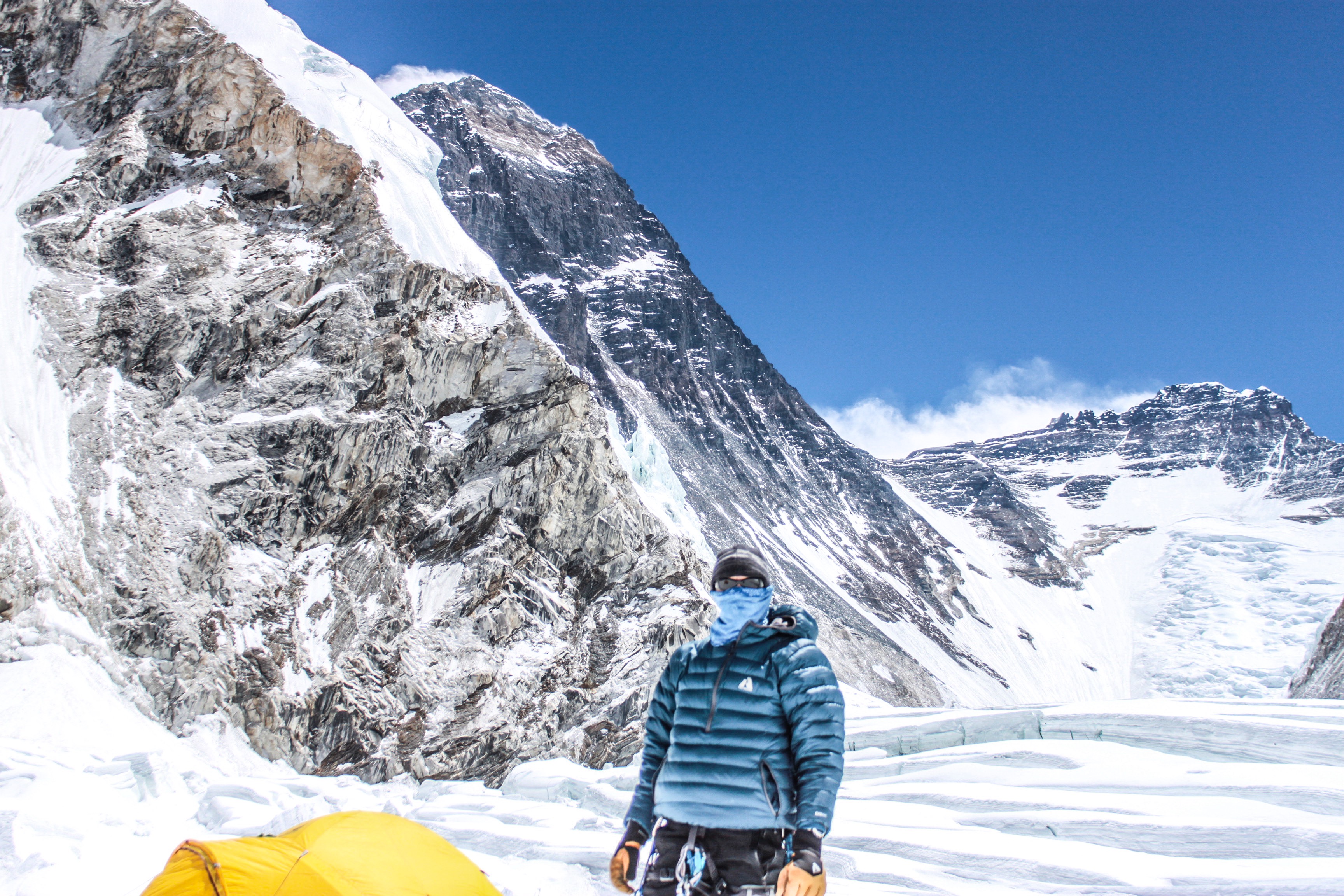 How did this experience change your life? What did you learn about yourself?

Most people I talk to have never had a major experience that’s tested their survival to the extreme. In fact, most ride out life well within their comfort zone. Having gone through such a traumatic experience has opened my eyes to what I’m capable of overcoming through faith and focus. I feel truly blessed to be able to share this with others to help get them through whatever challenges they are facing.

​I’ve dealt with years of PTSD from surviving such a traumatic experience. I’ve learned to cope with it over the years, but on occasions something will trigger that moment on the mountain. It’s not something that’s going away, as it’s a part of me now, so avoiding it will only make it worse. I’ve found talking about it (motivational speaking) and getting back in the mountains is my best therapy. 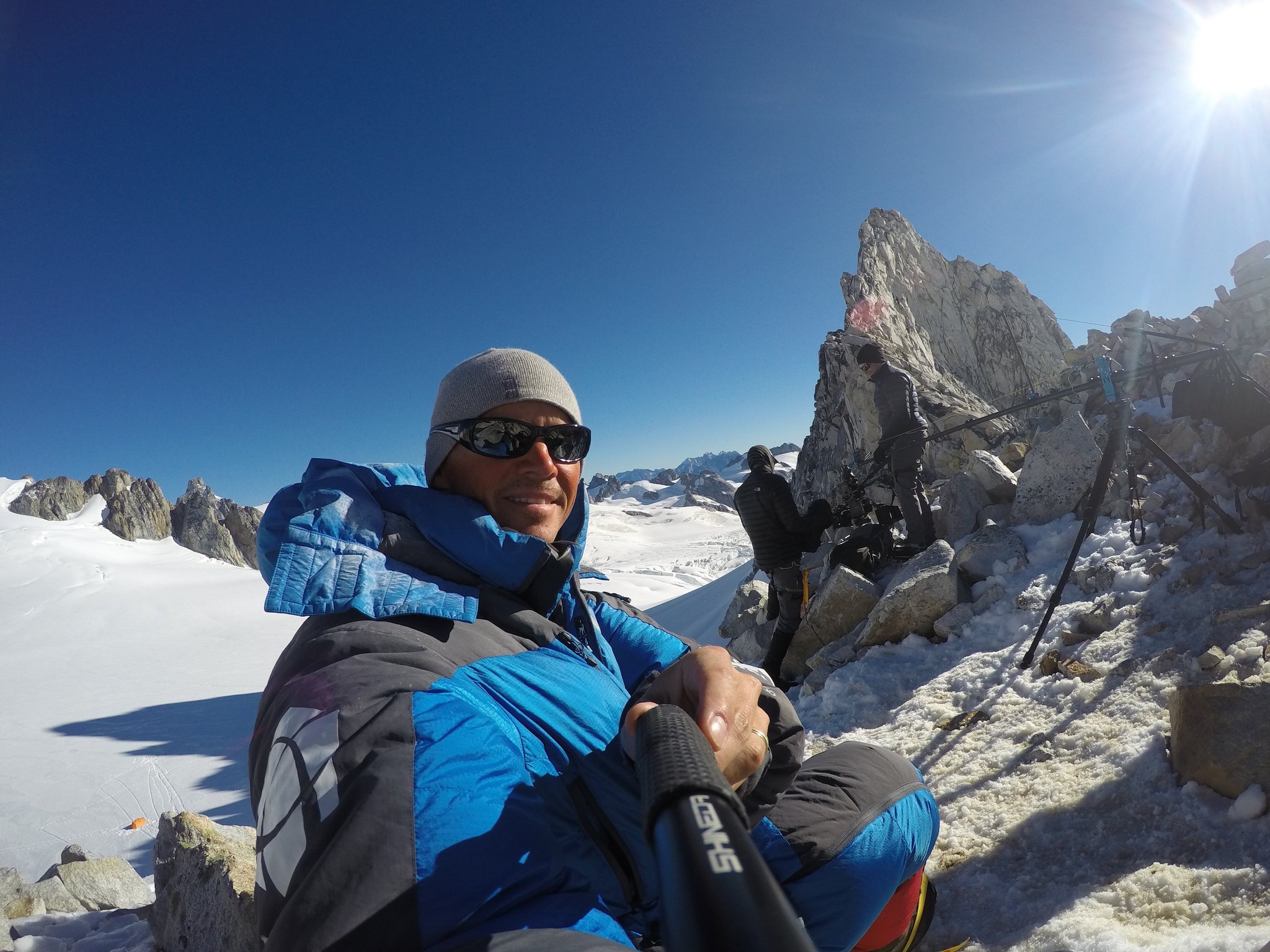 How do you want to use your story to inspire others to never give up in the face of life’s challenges?

People can’t relate directly to my experience (thank God), but it does give them an example of what is possible. Everyone faces challenges and we all try to get through them on our own.  When we can be fearless in very fearful situations and lean on our faith, releasing it to God, we can overcome anything through Him.

Now that you have climbed all Seven Summits, which ones are the most memorable?
I’ve climbed all 7, but summited 6. I’ve had 3 expeditions on Denali and even snowboarded it once, but I’ve yet to pierce my crampons on the summit. I’ve come within 1000’ of the summit but weather has prevented me from achieving total success.  Everest is obviously memorable, but they are all so unique that they’ve all shaped me in different ways. I’ve been very fortunate to visit orphanages during each of my travels and I also had my wife and kids summit the highest peak in Australia (Kosciusko) with me. That was about as special as it gets. 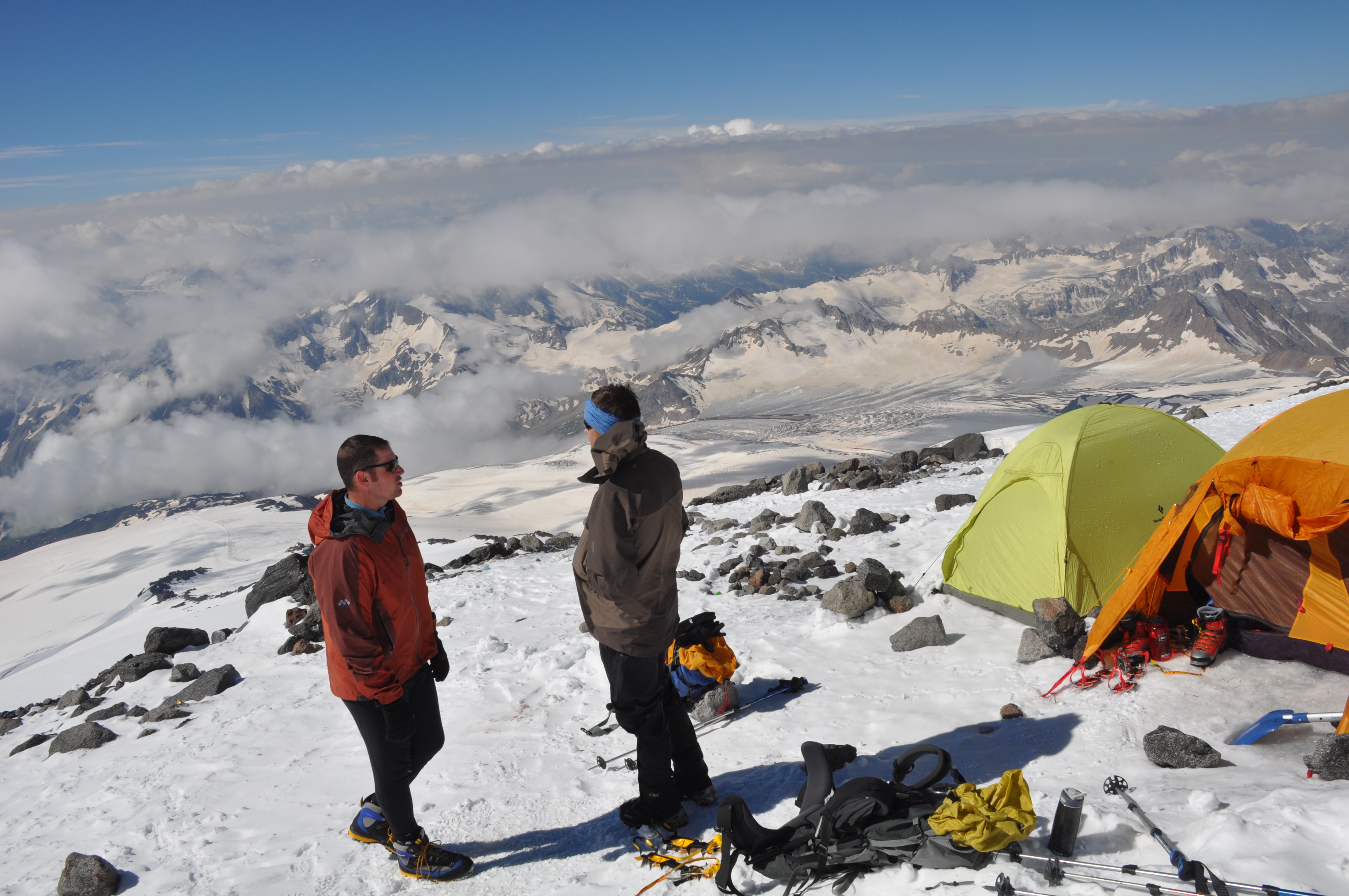 What are your next big adventures?

I have made a lifestyle of adventure so that my family and I live to the fullest. My kids are getting older now and we love climbing, biking, rafting, snowboarding. I continue to explore the world, but I try to include my family.

I feel it’s important to make the most of life and I don’t isolate that to my own selfish goals. For instance, my daughter (13) has already been to 6 of the 7 continents, including an orphanage in Argentina and a mission trip in Swaziland, Africa. 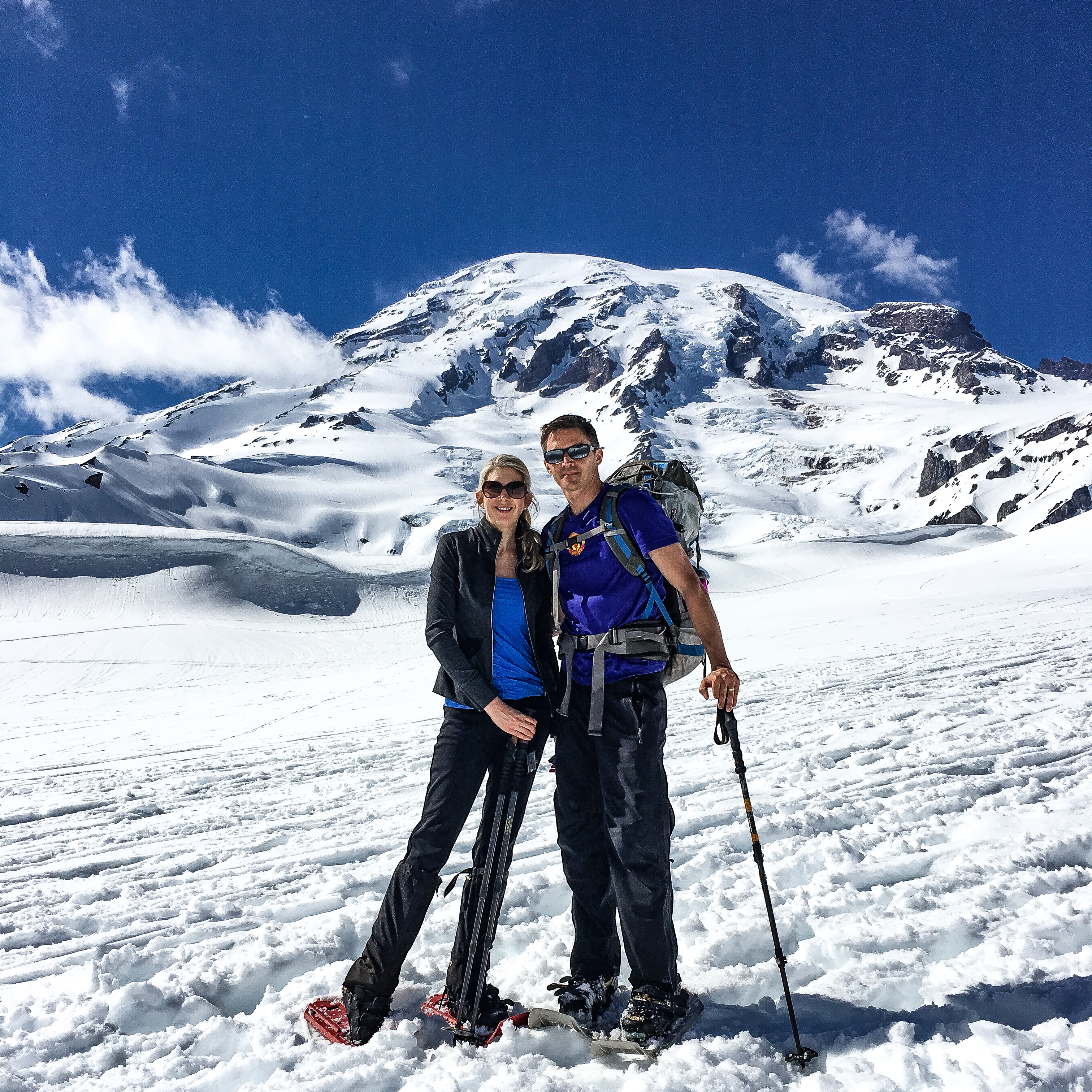 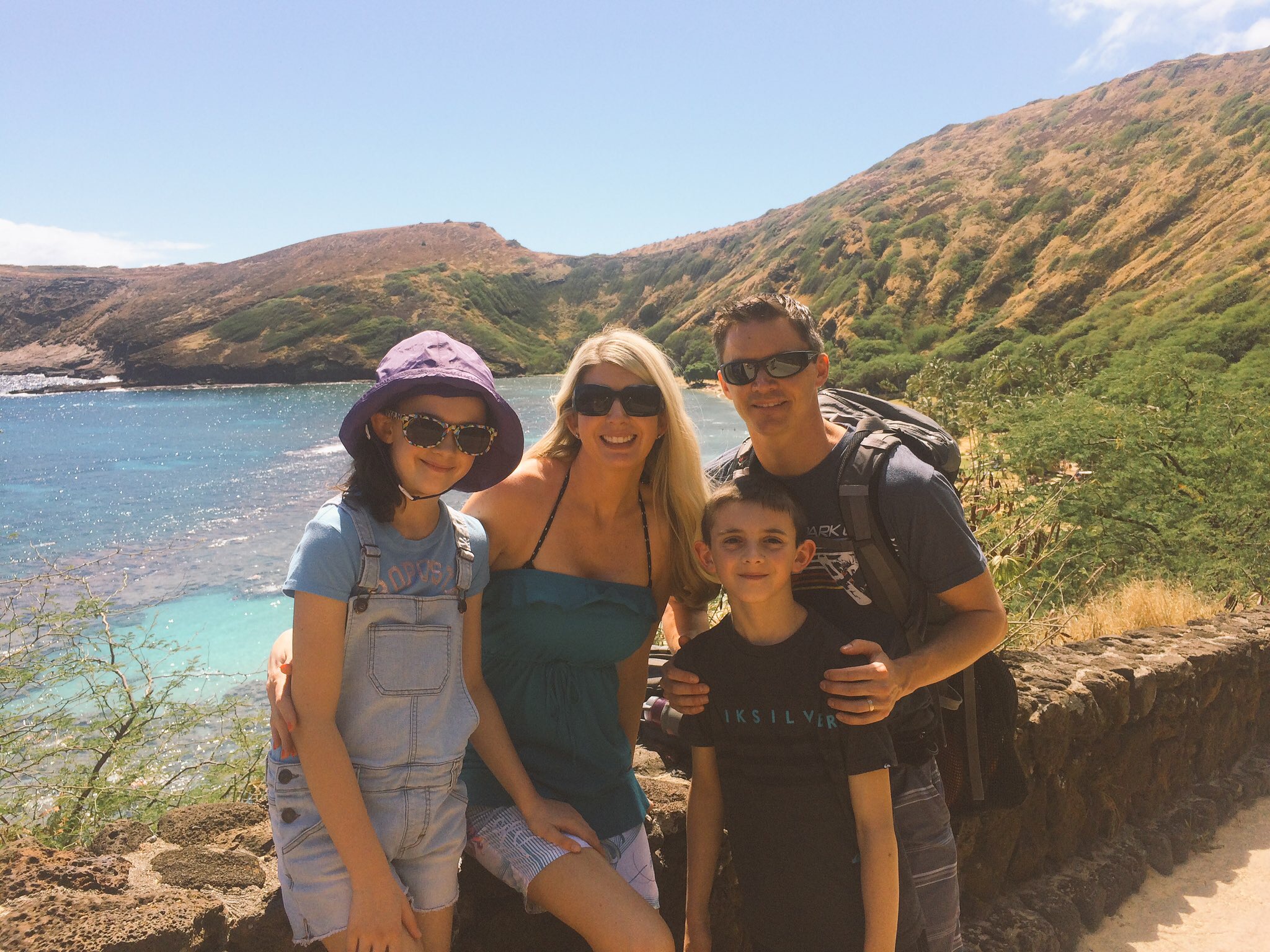 Want to read more about Brian’s story of survival on the world’s highest peak? Check out Blind Descent, now available on Brian’s website and Amazon. 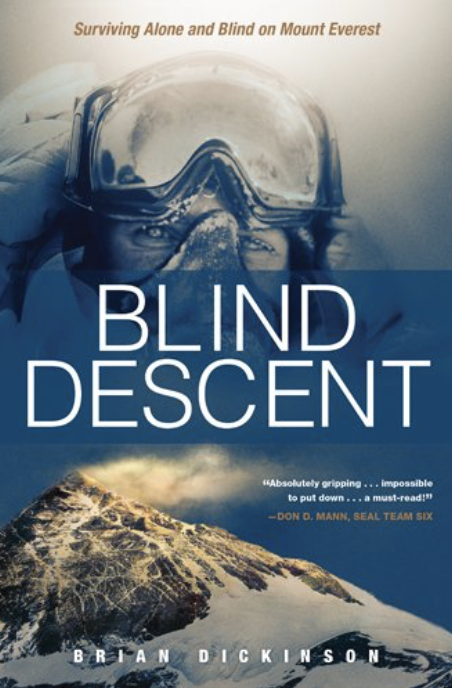 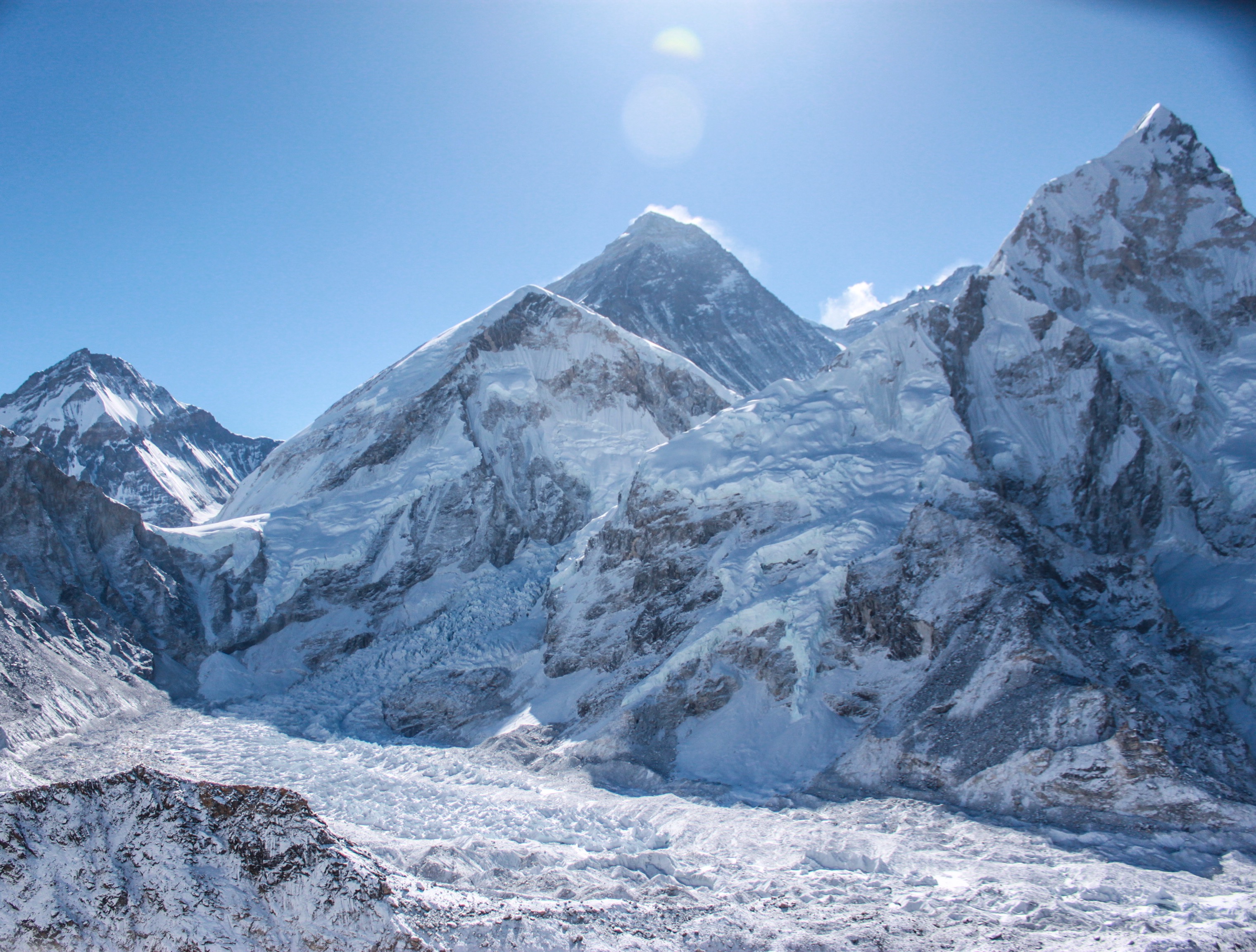