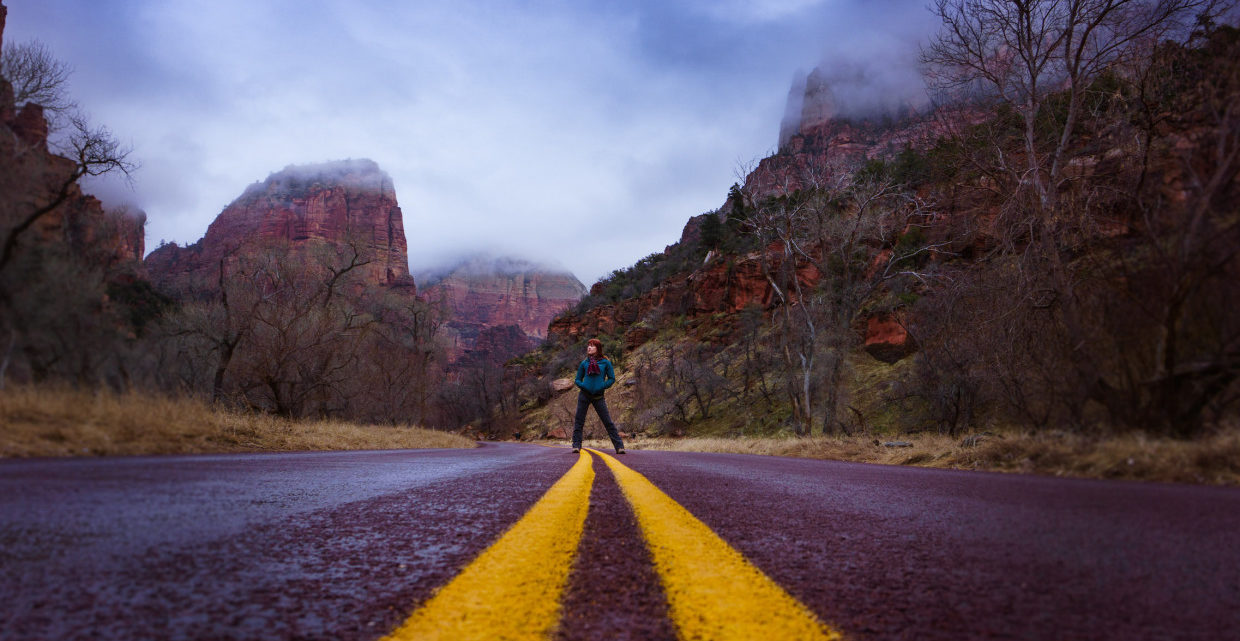 “I feel bad about Ben,” J.C. muttered as we tip-toed down the razor’s edge of Angels Landing. “He would have loved this.” I nodded, squinting as I peered off into the brittle, orange canyon, 1500 feet below. At that exact moment, a pair of bouncy, brunette pigtails inched over the top of the trail where the chains meet their steep demise, carried by Emma, who looked nervous, wild, and full of vertigo. Ben’s curly head of hair followed shortly behind, smiling. I laughed out loud, grinning like a maniac. Emma had faced her fears and hoisted herself up nearly a thousand feet of wet sandstone to share this moment with us, suspended in the clouds as the sun began to wash itself over the striped walls of Zion National Park. Welcome to Utah.

In an epic bid to stretch the possibilities of weekend roadtrips away from Los Angeles this winter, I recently found myself planning my first trek to Utah and its fabled Zion. I’d been hearing about the place for the better part of a decade, clumped, red sandstone hoodoos littered with Pinyon Pine trees forming bright, panoramic canyons of enormous scale. When you look up “best national parks to visit in the wintertime” online, Zion pops up high on every list, and it’s easy to understand why. The snow-capped rock formations create an all but subtle juxtaposition of copper and white that spans for miles in every direction, plus, the possibilities for off-trail peak bagging are huge. Despite snow melt causing unsafe sandstone conditions for many of our climbing objectives, we still had a gorgeous and varied January tumble through the park, and I hope these tips and highlights can serve to illuminate your own journey!

First of all, Zion National Park has winter weather that varies greatly. A friend of mine climbed Angels Landing in the snow over New Years, but upon our arrival at the trailhead 2 weeks later, we encountered merely wet, slippery sandstone. Temperatures can vary between 20 – 50 degrees Fahrenheit, which means you’re either dodging ice and snow or watching were you put your hands when you rock scramble so that stable-looking holds don’t crumble in your palms. There are also several chunks of the park, much like Yosemite, that are higher elevation, and therefore hold more snow and lower temperatures than the main canyon where the road traverses though.

We jumped on a ton of trails during our brief time in the park, and I sincerely feel that Angels Landing is the absolute best. You trudge up switchback after switchback cut into the edge of Zion’s main canyon before ascending an incredibly exposed class 3 route up the neck of a massive sandstone behemoth. There are signs everywhere informing you that 6 people have fallen from these cliffs in the last 10 years, so you feel like a complete badass when you push onward, death in your rearview, and begin to ascend the chains. Honestly, it reminded me quite a lot of the Half Dome trail in Yosemite, an infamous and equally sketchy climb up the steep back of a massive dome. And, much like Half Dome, the crowds make the trail much scarier than it needs to be. Wear boots with good tread, take your time, and screw your head on straight when you need to pass people on the chains. 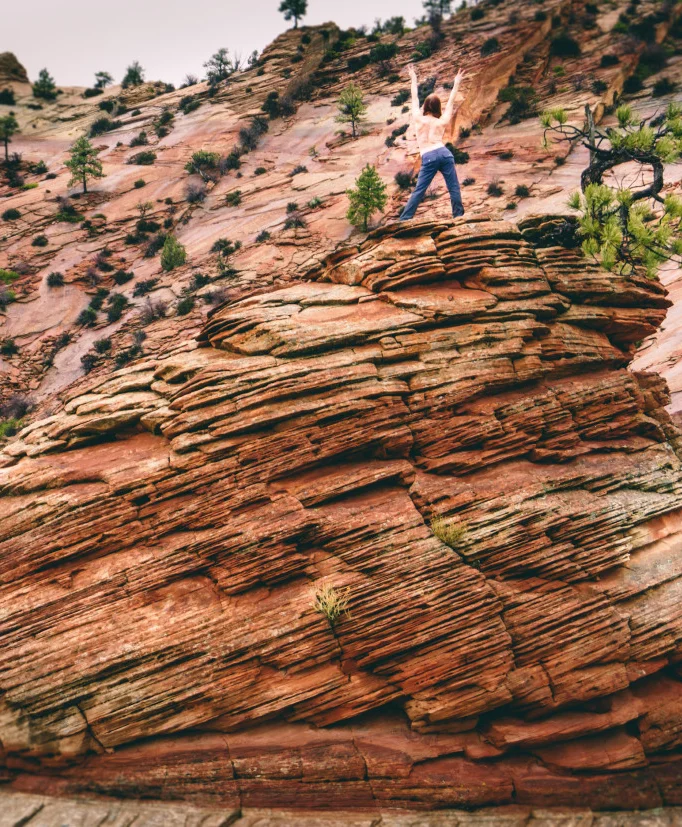 If you happen to make it to Zion when it’s below freezing or dry and without snow, there are a multitude of easy, off-trail class 3-4 scrambles to spice things up and satiate your danger bug. Cave Knoll and Firepit Knoll in the Kolob Terrace section of the park are bubbling over with alien landscapes, stacked, round hoodoos sitting like rust-colored teardrops in every direction. The ten mile drive to reach this sparsely populated section of the park will truly make you feel as though you’ve time-traveled into the wild west, with valley homesteads and ranches dotting the horizon. Checkerboard Mesa was also high on our list of class 3 rock climbing in Zion, but after post-holing up to my thigh as we tried to navigate the drainage around to the back of the rock mass, we decided to call it and take awestruck pictures of the completely unreal texture on the wall’s front end. If you find yourself on the less popular east side of the park, I implore you to jump out of your car and hike off trail a bit near Checkerboard Mesa. The solitude and bizarre rock shapes are noting short of inspiring.

I’m sure I’m preaching to the choir, but I’d feel remiss if I didn’t take a minute to say it plainly – it is absolutely imperative to remember that, no matter how awesome or easy a route looks, climbing on wet sandstone is never a good idea! I can’t tell you how many times a member of my group grabbed a jug on a canyon wall to hoist themselves up, only to have it break off in their hand. We had at least 5 or 6 climbing objectives that we had to scrap last minute due to the quality of the rock that week in the park. If this does happen to you, do not despair! Angels Landing, The Watchman, parts of East Rim Trail, and the West Rim Trail were all jaw-droppingly beautiful and ready to be hiked. If you only want a quick excursion or are with family or a less athletic group, the one trail I would implore you to check out is the Canyon Overlook Trail. We sped over to watch the clouds disperse just as the sun was setting, and the way the light trails meander through the Triassic canyon is pure magic. 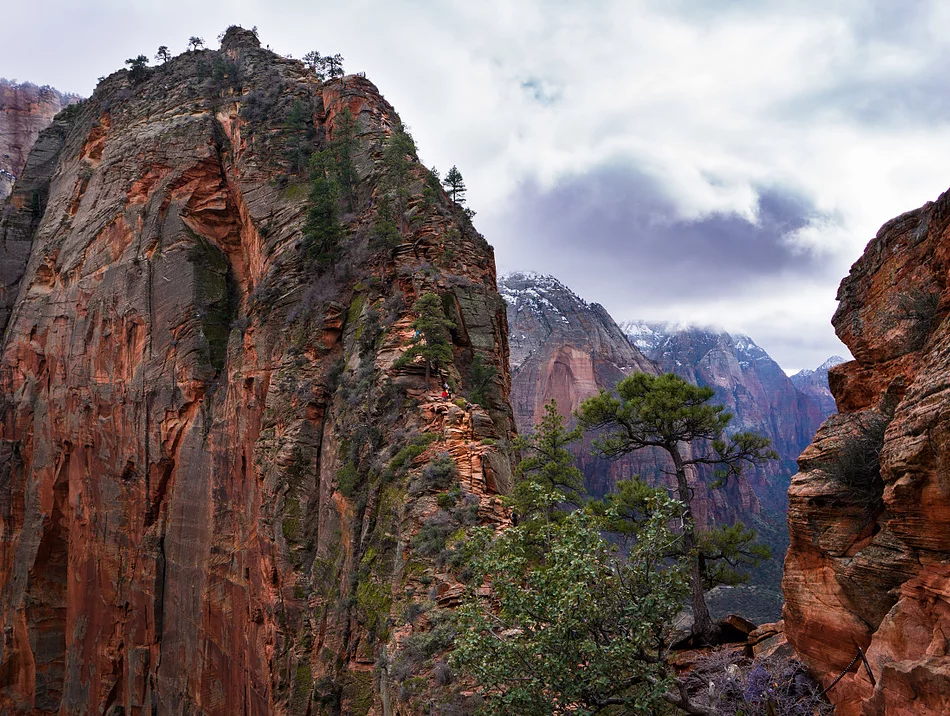 With all my weekend warrior road-trips, I try to keep costs down as much as possible. One thing I adored about Utah that I haven’t found quite as close to the national parks in Cali was the abundance of cheap, clean motels that offer a free breakfast. For a thrifty $40-50 per night, you can get a double bed room in Hurricane, UT and drive a mere 20 minutes into Zion each day. I’m a backpacker dirtbag at heart, and we were blessed with weather that would have made camping within the park’s boundaries possible, but there’s something emboldening about knowing I’m going home to a warm bed that makes me push harder and longer in the snow, unafraid of wet gear.

I used to get cranky living in Los Angeles in the wintertime. I felt stifled by the fact that all my favorite trails were covered with snow while I was held captive in a smog-ridden constellation of concrete that the sun beat down upon as though time’s essence held no weight. Then, one day I realized that we live in an absolute mecca for road trips, and my quest to become a weekend warrior, in earnest, begun. Winter shouldn’t keep anyone from exploring some of our nation’s greatest treasures. It’s often the most magical time to visit the national parks, and you’re sure to see things that summer simply cannot provide. So go on, declare a snow day. I dare you. 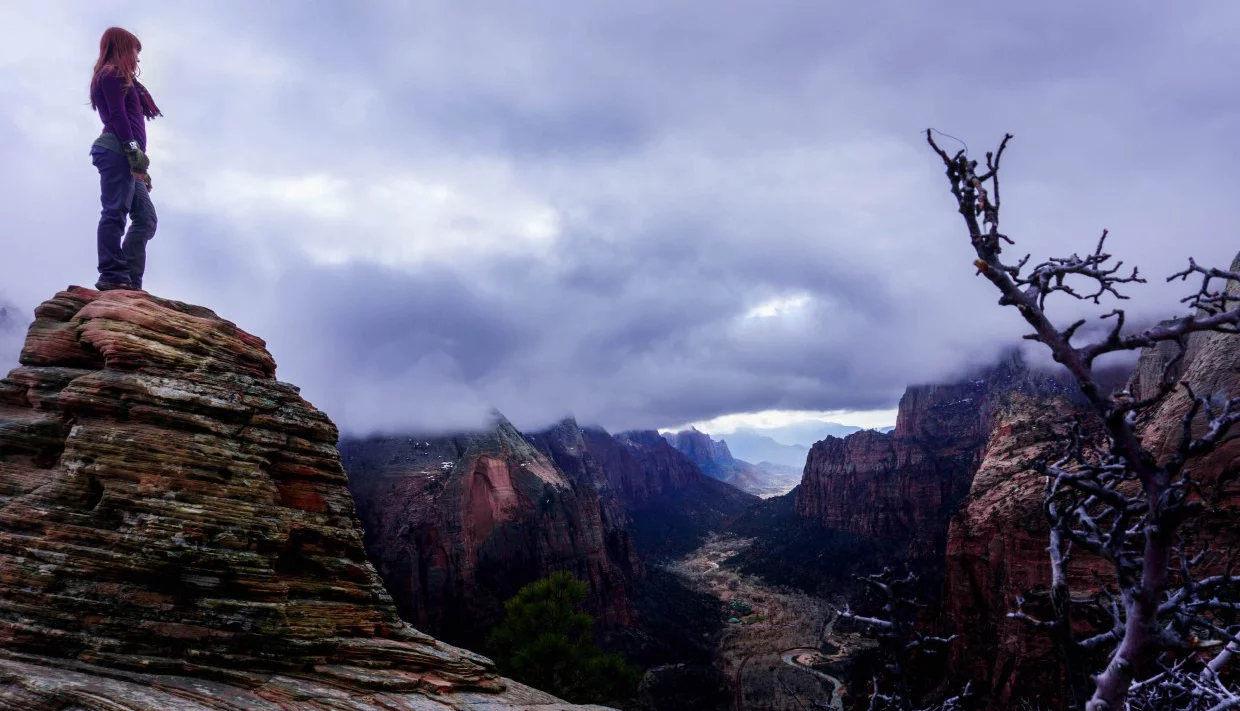