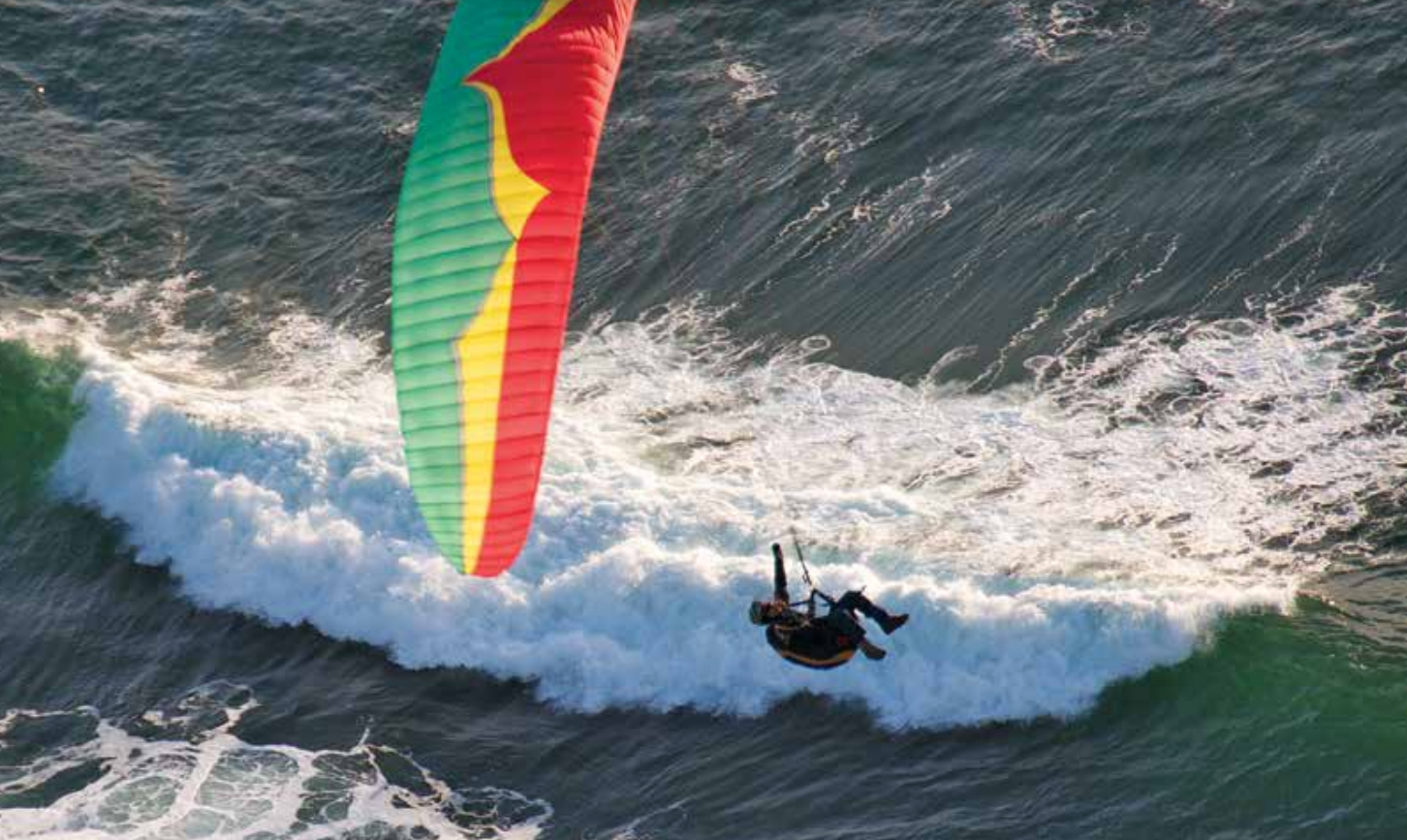 In his first installment, Jim Jennings broke a finger, fractured a heel, got 50 stitches to the face, fractured his vertebrae, separated ribs, watched seven BASE jumpers and skydivers die in the span of two years and then witnessed 12 more fatalities in the following 7½ years.

After retiring from BASE, I had to feed the beast and continue flying. Skydiving was getting impractical, so I tried a new form of canopy flight we called ground launching. To ground launch, we first inflated a skydiving canopy at the top of a hill and then foot launched, swooping down to the bottom, better known today as speed flying. When the small sand dunes of Marina Beach where we first took flight got boring, we needed a bigger challenge.

I had recently moved to San Francisco and discovered a place called Mussel Rock Beach, known by the locals as “The Rock.” A tall southwest-facing slope called the “Green Giant at The Rock” called out to me one day. I thought I had discovered paradise and continued to climb and swoop down the Green Giant for the next several months. I got so used to flying down the slope on rear risers that I would continue using rears into my final swoop, before landing on the beach.

One very foggy day I hiked up the Green Giant and flew down; the flight was one of my best because I was forced to fly really close to the slope in order to be able to see my way down the hill, ending with a 210-degree swoop on rear risers. I quickly hiked back up and attempted an identical flight, but this time I started my swoop a tiny bit earlier with very little extra height. I obviously had no idea what I was doing when I attempted a 270-degree swoop on rear risers, and the next thing I knew I was staring at the ground knowing inside I was in for major pain or possible death. A split second later I hit the sand with enough force to fracture my left femur into several pieces.

Three months later, I found myself hiking back up the Green Giant. At the top the winds were cross and light and it was difficult to get the canopy inflated. I had to do a forward launch to create enough wind to get off the ground. When I finally got into the air, I didn’t notice that I was quickly headed toward a nasty little wind rotor that partially collapsed my canopy causing me to go parachutal or into a parachutal stall. At that moment I thought, “I’m an idiot! I just healed and I’m going to break my bones again!” But my canopy quickly re-inflated before bad things could happen and I continued to fly down and land on the beach safely, swearing to myself to take up a different flying sport to replace ground launching.

Paragliding, my next flying adventure, made perfect sense, as it was only 15 minutes from home and was what everyone else was doing at The Rock. Dave “Dingo” Royer, my mentor and another pilot with passion to fly all things unpowered, loaned me a wing and said he would get me back in the air. Within a matter of days, I was flying again, and for the first time I experienced the feeling of going up while under canopy. It was a magical experience I had never felt before, even after more than a decade flying parachutes, skydiving and BASE jumping. I quickly fell in love with my new form of free flight and the ability to stay aloft for hours, cruising around the coast with my friends at a sustained level of excitement. If you’re a skydiver or BASE jumper who’s never tried paragliding, you will be amazed how exciting it can be!

One day when the wind was stronger than I would have liked, I attempted to launch anyway. I went from a lower site where the winds were not quite as strong as the normal launch higher up the hill. Due to my lack of forethought and tunnel vision to fly, when my wing got above my head, I started going backwards. Since I was practically self-taught, I wasn’t sure what to do so I did the opposite of what I should have done. I gave input to my brakes, which forced me backwards even more, pushing me towards a fence. I tried to collapse my wing, but during the wing’s descent the strong winds yanked and pulled me right into the fence where my thigh caught the edge of a 2×6 board. The board began bending and flexing, digging into my leg, finally releasing me, hurtling me to the ground. The result was a deep subcutaneous bruise that turned into half a grapefruit-sized sac of fluid that took two years to fade away.

I always wanted to get into hang gliding, simply because no other form of human flight resembles how birds soar. But I hesitated because I didn’t know any hang glider pilots, and it seemed to be such a big commitment to lug around a twenty-foot bag of metal parts and nylon. When I finally had a garage to store a hang glider and a few extra bucks, I had to fulfill my dream of flying like a bird! Initially, I learned to fly from an inland site with light winds, where a strong flare was required to put the brakes on and land safely. The goal was to get good enough to fly from Fort Funston, which lies on the coast 20 minutes from home, instead of taking long drives to where the conditions were less predictable.

The day finally came, after what seemed like an eternity of scampering about on the inland hills. I was chomping at the bit again, and I did not have the preparedness or site briefing I should have had. My launch and flight were great, and after an hour it was time to land. Without a proper landing pattern in mind, I ended up in the wrong area, an area where a vicious, unforgiving, wind rotor loomed waiting for its next victim. A few pilots now know that area as the “JJ LZ.”

Without the proper site-intro briefing, I employed my strong flaring techniques in a 20 mph wind in the JJ LZ. I flared hard into the rotor, popping my nose cone 20’ up into the air and sliding to the right without control. My glider caught a wingtip, turned hard, and I swung through the control frame and impacted the ground with my face. Luckily, I was wearing a brand new full-face helmet that mitigated the damage, but I tore ligaments in both shoulders and bruised my internal organs from the weight of my legs falling on me. A couple months later I was physically able to hang glide again, but my confidence had been shattered. All pilots know confidence is integral to flying performance and safety.

Needless to say, I have had serious issues of safety throughout my flying career, but I’ve learned that if you have the skill sets and the right tools to take advantage of the varying conditions, you can get into the air and experience flying with your friends more often. These are the feelings my fellow pilots chase, and the lifestyles we choose to live—always looking to get in the air and fly.

The crossover pilots of Fort Funston and The Rock are learning that techniques and perspectives from one flying sport can open up the imagination to try something new and different in another flying sport while increasing one’s level of safety and awareness. Because most pilots grow up in a mono-wingual culture, their vision is limited.

Crossover pilots have a different kind of confidence and vision to question the status quo, pushing the boundaries and limits of what is possible with the flying sport of choice. For example, at the coast we have had a lot of career skydivers recently cross over to paragliding and hang gliding, and some interesting things are happening. In skydiving, flying relative to each other is a very common way to plummet toward the earth while in freefall and under canopy. At the coast, skydivers are taking skills from their past and applying them to their new sports.

Not only are we taking our skills from skydiving and applying them to paragliding and hang gliding, we are taking our culture of trust, teamwork, and cooperation, and applying them as well in the form of flying relative to each other, taking grips or docking, and flying in formation. The idea only started being manifested in our local flying community last year, and while we have had some fun flying relative to each other, we have only scratched the surface with these innovative ideas. Thus far we have seen paraglider pilots docking with each other and flying in formation, paraglider pilots docking with hang gliders, and hang gliders flying in formation.

To showcase our different flying experiences, we held a series of seminars and short film showings called the NorCal Seminar Series & Free Flight Film Festival. During the seminars, expert speakers tell a crowd of about 120 pilots from all flying sports about their experiences with their particular flying discipline and sport, while the film festival part showcases films by local videographers. Northern California skydivers, base jumpers, hang glider and paraglider pilots from drop zones in Davis, Byron, and Lodi, and flying sites Fort Funston & Mussel Rock Beach have all submitted films.