Marine turtles must be high on every diver’s wish list of species they would love to see when traveling on a trip of a lifetime. These charismatic animals can be found throughout the world’s temperate and tropical oceans, but several destinations in South East Asia are particularly special for encounters with marine turtles.

We’ve carefully selected our top 5 destinations where you can not only see turtles but also get a glimpse into their daily lives, be it feeding, mating, nesting or hatching. From the pristine beaches of the Maldives to the iconic Barracuda Point dive site at Sipadan, these destinations will provide you with unforgettable experiences. 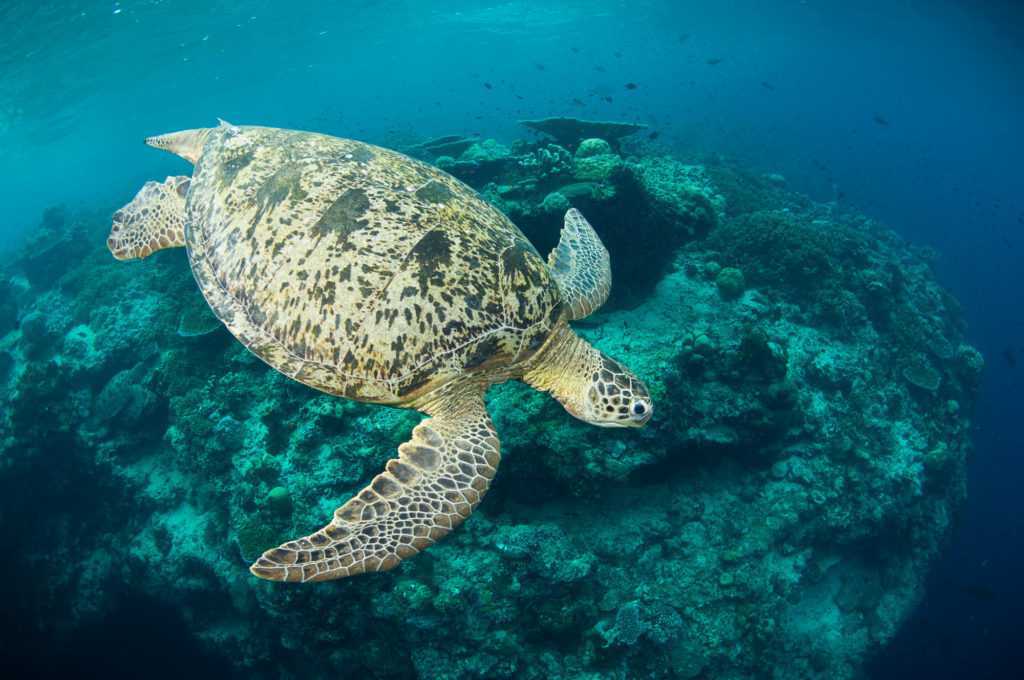 ​The world famous islands of Sipadan remains the best place in SE Asia, if not the world, to dive and snorkel with green and hawksbill turtles. Visitors to this tiny island in the Celebes Sea, off Sabah’s southeast coast, will see turtles every day – 20 or 30 on a single dive is not unusual, particularly at low tide when the green turtles that feed on the seagrass beds move back out to the reef for a rest or to visit a cleaning station. If lucky, divers can also witness mating battles, as a group of male turtles chases a receptive female and attempts to grapple onto her back, with all the other males struggling to do exactly the same. The resulting biting, fin flapping and general turtle mayhem is extraordinary to watch and Sipadan is one of the best places to witness this amazing behaviour.

​Sipadan is also home to the infamous Turtle Tomb, a cave system beneath the island littered with the bones of dead turtles. The caves were first discovered by Jacques Cousteau and made famous by his 1989 film about Sipadan – ‘Borneo: the Ghost of the Sea Turtle’. It is thought that turtles enter the tomb to rest and become disorientated or lost, particular if they enter at dusk. The unfortunate animals then rise to breathe, only to be become trapped in the ceiling and drown. The result is a spectacularly eerie dive exploring this unique animal graveyard.

​Best time to visit: Year-round with turtle mating season in July and August 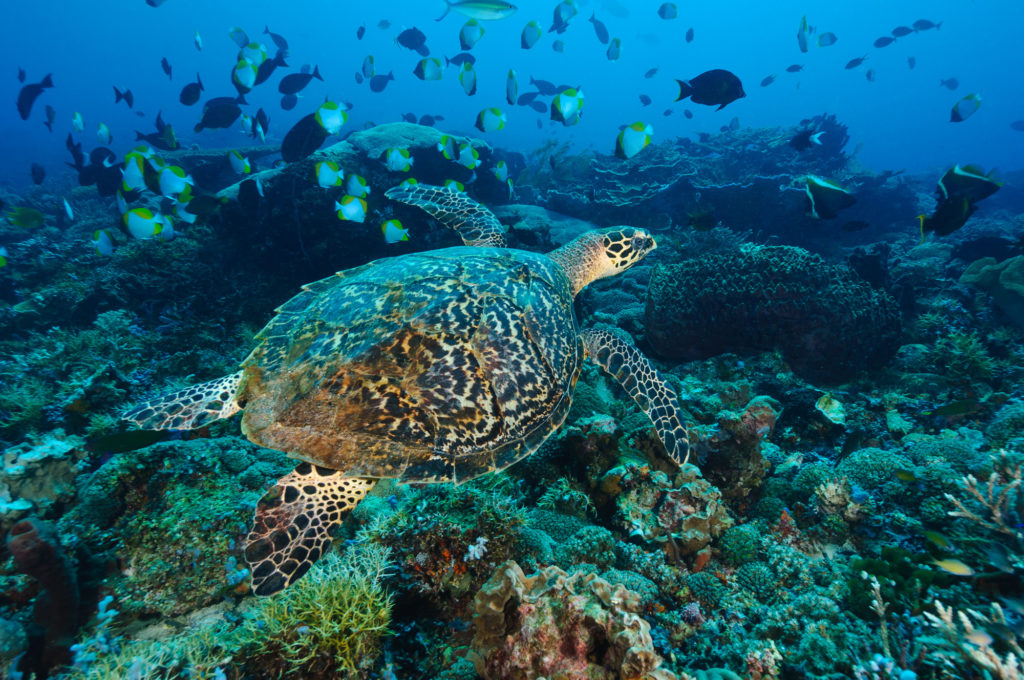 ​The islands of the Derawan Archipelago are thought to be Indonesia’s largest rookery for green turtles and are also home to large numbers of hawksbill turtles. In fact it is difficult to NOT see a turtle on many of the dive sites, especially around Derawan, Sangalaki and Maratua where these animals are seen all around the reefs. Visitors to these islands even have a great chance of witnessing nesting on some of the more isolated beaches, although turtles still even come up into the villages as well!

​Conservation of the turtles in this part of Indonesia has had a somewhat chequered history. In the 1980’s and early 1990’s, many of the turtle eggs were collected and the hawksbill turtles were targeted by poachers for their shells. In 1993 a resort bought the egg collection rights in an attempt to stop the trade, but the license was then awarded to a commercial collector several years later. Then in 2000 an NGO started working in the area, campaigning to stop eggs being collected, helping to protect nesting beaches and raising awareness amongst the villages, but after a decade of work, the NGO had its permits cancelled. Today there are other NGOs and resorts working to protect the turtles of the Derawan Archipelago and the islands are still an incredible place to dive and snorkel with turtles, as well as witness nesting behaviour. The future of the turtles of Sangalaki and Derawan currently lies in the balance but with more and more tourists coming to the islands, and more work being done to protect the turtles, the future looks brighter.

​Best time to visit: Year-round, but time your trip for the full and new moons for the best chance to see turtles nesting 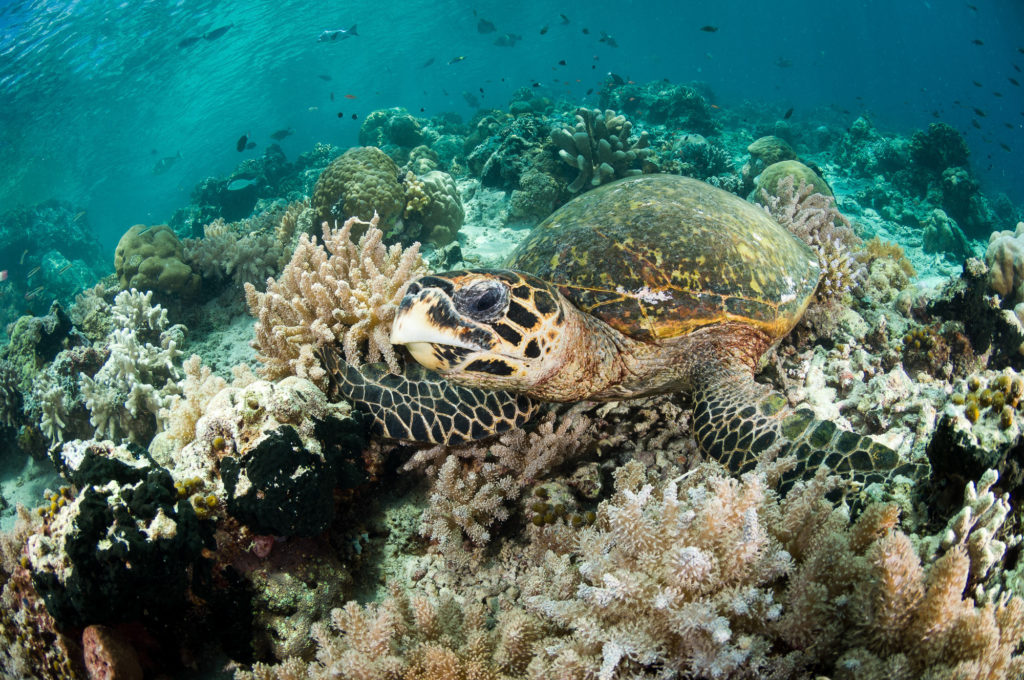 ​Throughout Sulawesi there are a number of well-known areas where turtles can be encountered, but it is probably the Bunaken National Park in the north where dives with turtles are most likely. The national park has been protected for many years and the reefs and incredible marine life have flourished. Green and hawksbill turtles can be seen on throughout the park, but sites such as Lekuan, Muka Kampung and Fukui are probably the best known. Visitors can see several turtles on every dive at these sites, resting on the ledges, feeding on soft corals and sponges on the walls or simply cruising by, ignoring the noisy divers! The turtles have become very used to divers and will often approach closely as they make their way along the wall.

​The mix of different habitats, including large sea grass beds and healthy reefs, is thought to be one of the main reasons for so many turtles making their home in the national park. They also known to nest on Siladen, Bunaken and Manado Tua and the resorts are careful to minimise any disturbance to a nesting turtles should one be found. 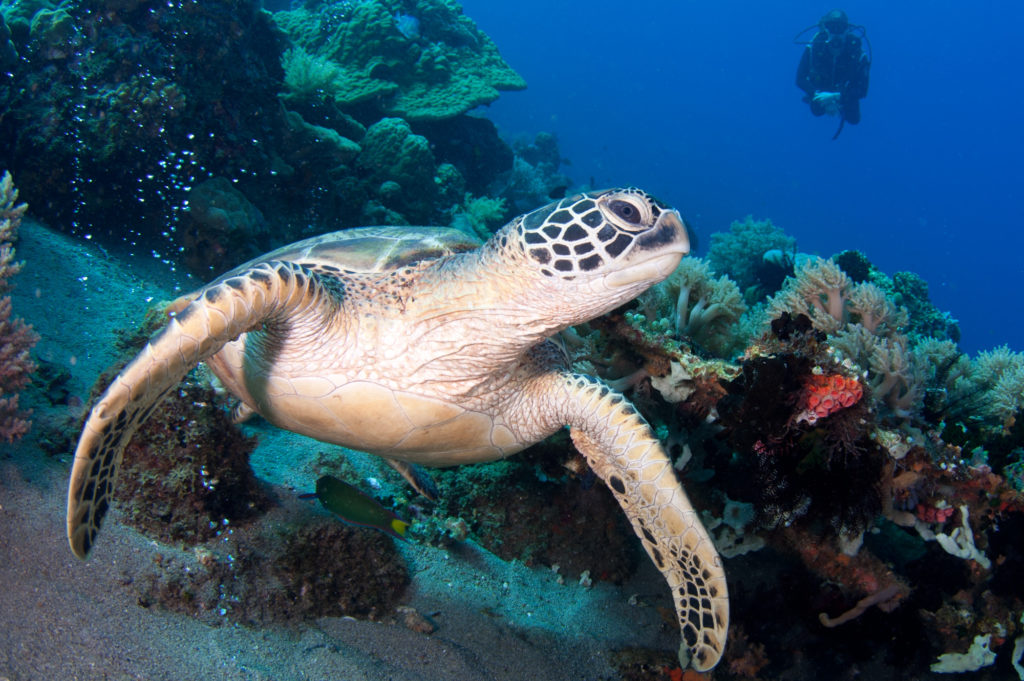 ​Dauin in Negros Oriental has become well-known as a muck diving destination but for many years, divers traveled to the area to explore nearby Apo Island – and dive with the island’s turtles. The island is famous for its reefs, fish life and green and hawksbill turtles that can be seen on every dive, as well as being highly regarded as a successful community-led conservation project.

Apo was first protected in 1985 then declared a protected seascape in 1994 and since then the marine life has flourished, including the turtles. It is thought there are so many around Apo because of the abundance of food on the healthy reefs; in fact the majority of turtles seen are feeding females. Both divers and snorkelers can encounter schools of fish and friendly turtles all around the island, and the turtles have become so used to humans they can be approached with ease – but not too close! There have been reports in the past of guides allowing guests to disturb and abuse turtles and conservation groups are now doing what they can to prevent such incidents in the future. Have a look at this fantastic video produced by LAMAVE and featuring the snorkeling guides of Apo Island.

Best time to visit: Year-round, but March – October has the best weather

Best place to stay: Anywhere on Siladen, Bunaken or the mainland itself 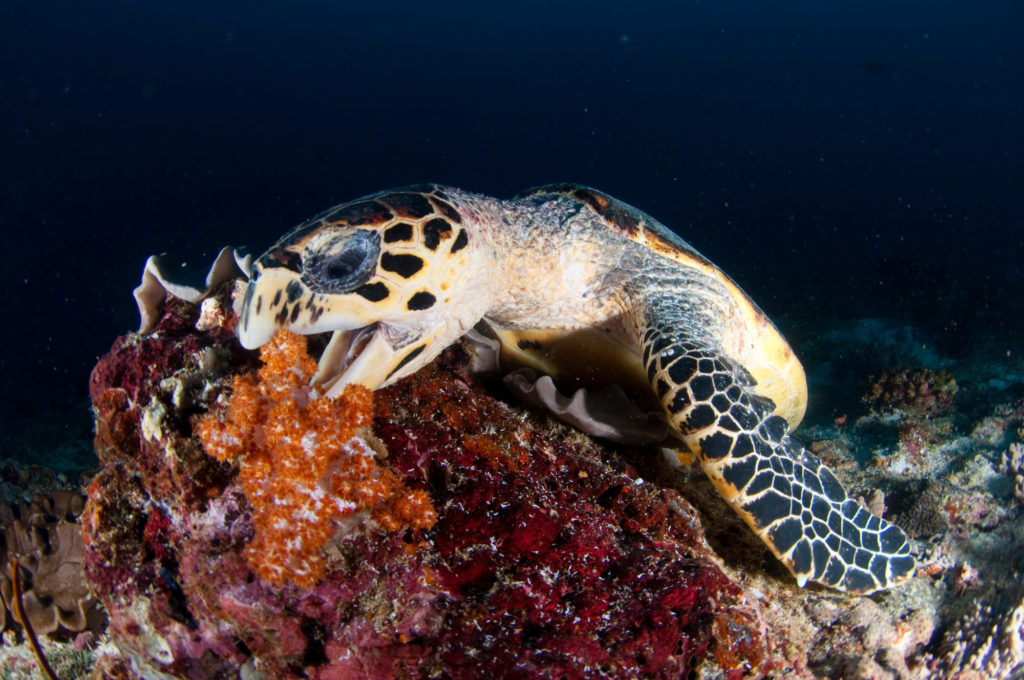 ​When considering the Maldives as a dive destination, most divers think of manta rays, sharks and reefs first, but the Maldives is also a fantastic destination to dive with turtles. Like our other ‘Top 5’ sites, visitors to the Maldives are most likely to see green and hawksbill turtles, even though the country is also home to olive ridley, loggerhead and leatherback turtles – the latter being now vanishingly rare unfortunately. Hawksbill turtles are most often seen, simply because they spend a lot more time on the reefs that divers visit, as opposed to the seagrass beds where green turtles prefer to spend their time.

​The Maldivian government has protected turtles and banned any trade in turtle products since 1995, reviewing its policies every 10 years since then. However, in 2016, the government made the decision to protect turtles indefinitely and extend the ban on trade in turtle products without any future review, protecting the nation’s turtles into the future and removing the threat of repeal of the turtle conservation laws.

​Scientists and conservation organizations have been working for many years to protect turtles throughout the atolls and one recent project aims to build up a photo ‘catalogue’ of all turtles found in the country. The Maldives National Sea Turtle Identification Program ID’s individual turtles from photographs submitted by divers, using the unique pattern of scutes on the turtles head as the equivalent of a fingerprint. So far the program has identified over 1,000 individual turtles, mostly of hawksbill turtles. And the top atolls for turtle sightings? Ari, North Male, Baa and Lhaviyani. You can learn more about this program at Marine Savers.

A FEW OTHER SUGGESTIONS:

​Turtle Islands National Park: The aptly named Turtle Islands National Park lies in the Sulu Sea off Sabah’s east coast. The park was created in the 1980’s to protect the turtles that use the islands as nesting grounds and covers a group of islands on both sides of the sea borer between Malaysia and Philippines. Visitors can stay overnight on Selingkan on the Malaysian side and watch female green turtles as they lay their eggs. The experience is carefully regulated: guests are not allowed to use torches or camera flashes on the beach at night, and must wait for a ranger to decide when it is safe to visit a turtle and minimise any disturbance.

​A trip to the Turtle Islands National Park can be combined with a dive holiday on Mabul or Kapalai, as well as visits to Sepilok and other jungle areas. Do get in touch with enquiry@zubludiving.com if you would like to learn more.

​Turtle Bay, Palawan, Philippines: In Palawan, Philippines, a small bay has become well-known for its turtles, and a conservation project set up to protect these animals. At Turtle Bay near Port Barton, the Secret Paradise Resort has spent the last decade protecting a small bay and several nesting beaches from poachers and illegal fishermen, creating a thriving marine sanctuary that is home to plenty of turtles. From October to March, green and hawksbill turtles arrive to nest on 4 beaches within the bay and adults are seen in the area all year around. Secret Paradise Resort is not a dive resort, but the turtles can easily be seen whilst snorkeling. If you are interested in booking a trip to Secret Paradise Resort, please get in touch with enquiry@zubludiving.com if you would like to learn more.

​Kei Islands, Banda Sea, Indonesia: The Kei or Kai Islands are part of the so-called ‘Forgotten Islands’ in the far southeast of the Banda Sea. The islands are little known in the wider world, apart from being one of the only places places where visitors have a reasonable chance to encounter the highly endangered leatherback turtle. These turtles congregate around the islands every year to feed on seasonal blooms of jellyfish, and the Kei islanders have learnt to take advantage of this and hunt the leatherbacks for food using canoes and spears, a traditional hunting practice that is allowed to continue to this day.

​Scubazoo first went to the islands in 2009 and are planning a return in November 2017. Read about the first trip here and stay tuned for news from the latest expedition.

Founder and main contributor to This Adventure Life, Kirsten Alexis has passion for all things adventure and the outdoors. She is an avid participant in action sports, such as skydiving, paragliding, snowboarding, high-altitude trekking, mountain biking, surfing and more. She is passionate about inspiring others to live their wildest dreams as well as conserving the environment for others to enjoy for years to come.