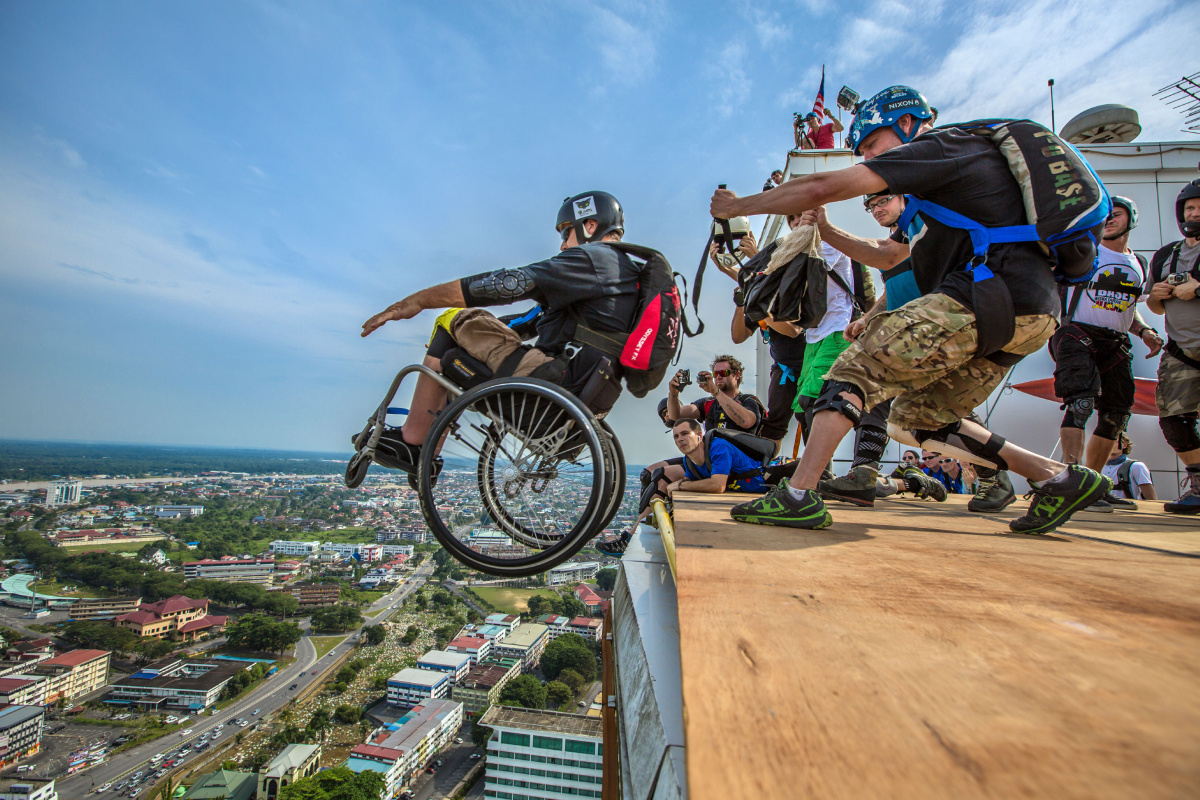 Lonnie, an elite extreme athlete from Canada, is one of the world’s most prolific BASE jumpers. Highly respected and admired by his peers and community at large, Lonnie was injured July 2004 while attempting a quadruple gainer on his 1100th BASE jump off a 486 foot bridge. The lines of his parachute tangled around his foot, not allowing his parachute to fully open during the fall. He crashed into the river at a speed of about 70 miles per hour severely breaking several bones in his body, neck and spine, and suffering a spinal-cord injury which left him paralyzed. Lucky to have survived that accident, he was told by his doctor he would never jump again. 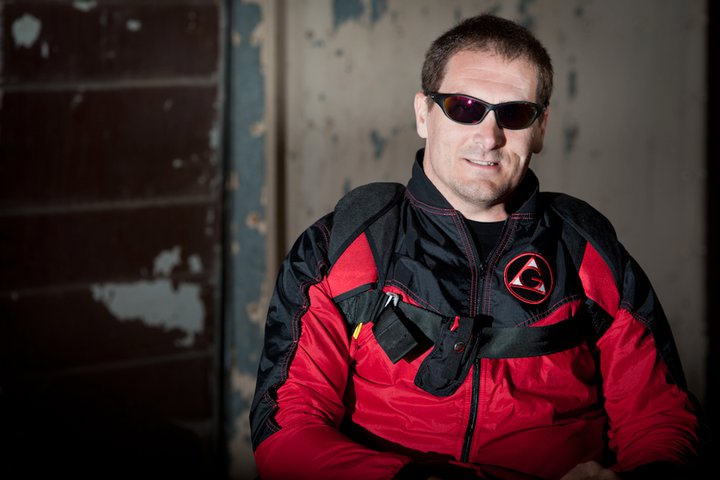 Unhindered by the effects of the spinal cord injury, Lonnie was back flying in the sky within twelve months post-accident. He then made his rounds and jumped off all four objects in B.A.S.E (Buildings, Antennae, Span, Earth) again, thereby earning himself the distinction of being the world’s first ever paraplegic BASE jumper to have jumped from all four of the objects. Lonnie Bissonnette is Para-BASE #1, and is currently the only paraplegic BASE jumper in the world to have jumped off of all four objects.​ 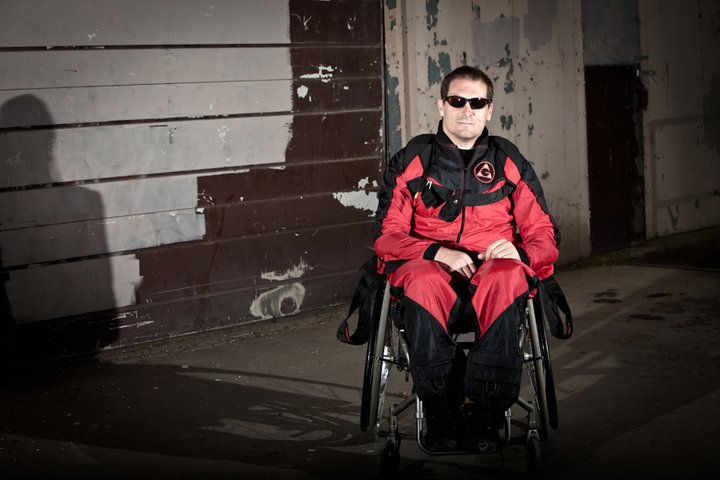 ​We are so inspired by your journey; from suffering a spinal cord injury from a BASE jump that left you paralyzed with doctors telling you that you will never jump again, to becoming the world’s first paraplegic BASE jumper to jump off all four objects, you certainly have shown the world an amazing example of never giving up! What made you want to pursue jumping after the accident?

I had always felt I knew the risks involved in BASE jumping, and I needed to do one more jump to prove to myself that I didn’t give up. After doing that first jump, I knew I needed to continue to pursue my passion for the sport. 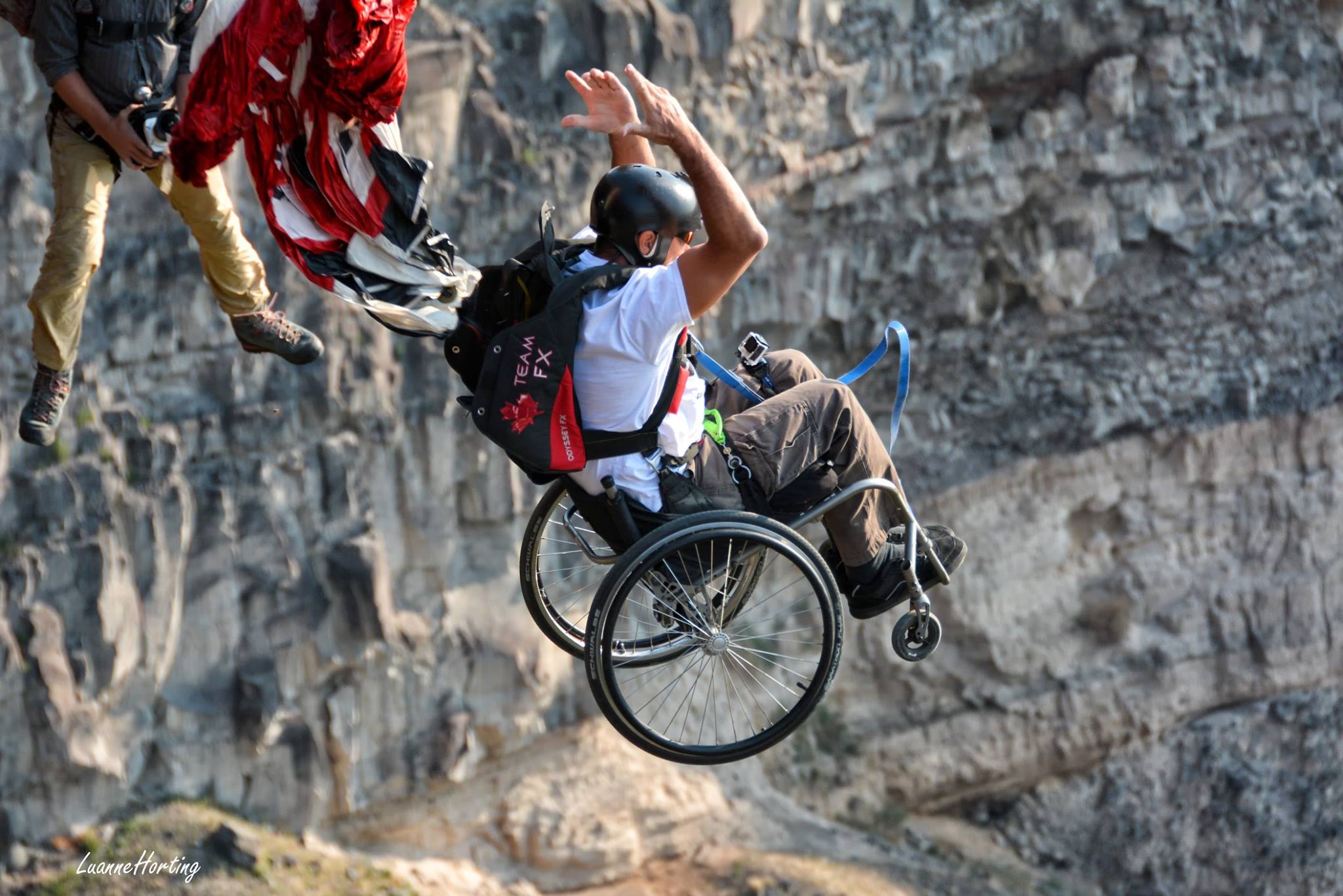 What is it about BASE jumping and skydiving that constantly bring you back to the sports?

These sports became a true passion for me. I love the camaraderie, and the beautiful places around the world these sports have taken me. There a very special bond you make when you jump with people.  I’ve made my closest friendships with the people I’ve had the honor to jump with. 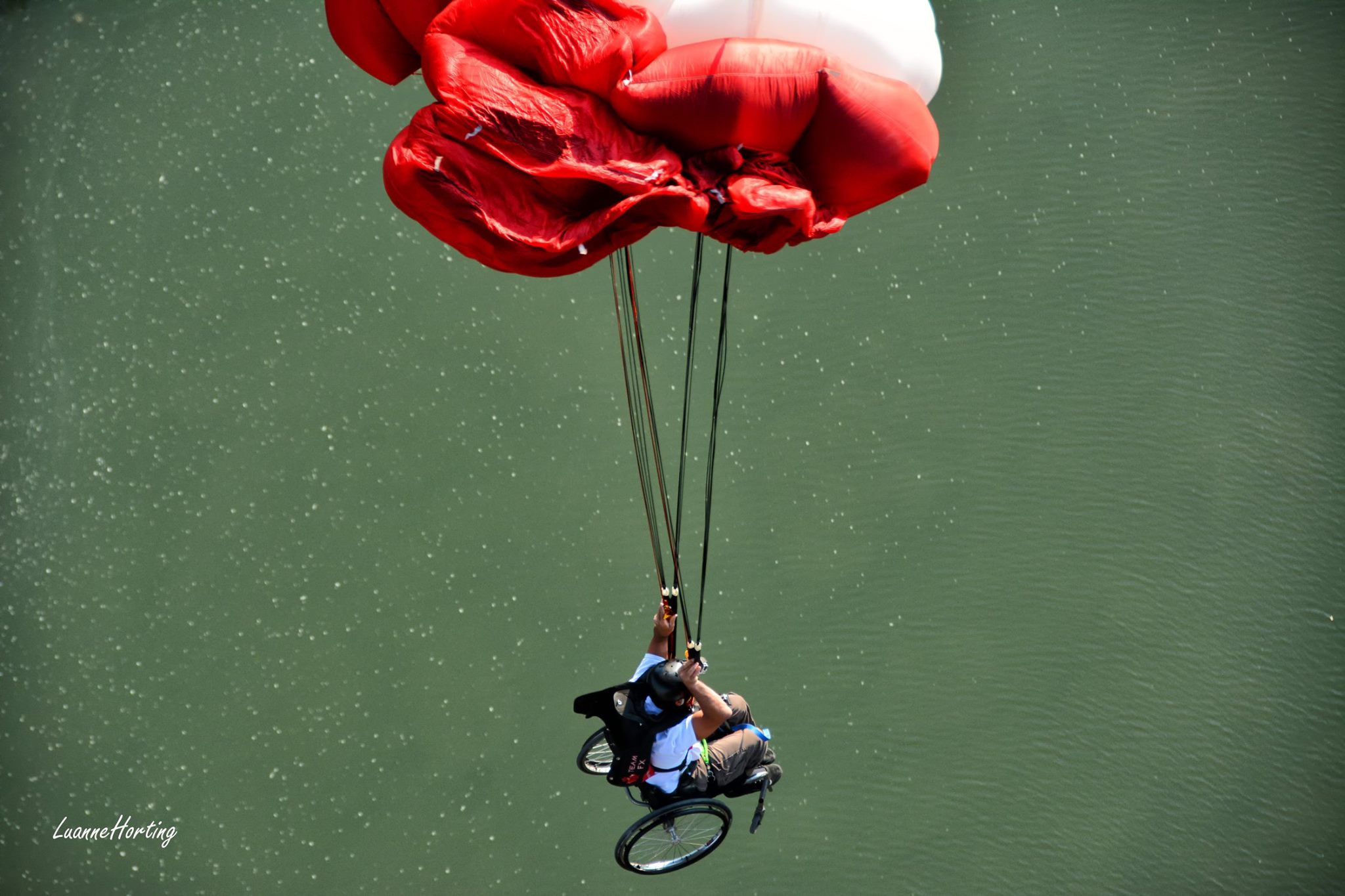 How would you describe the difference between the two to those who have never jumped?

Skydiving is jumping from an airplane, where as BASE jumping is jumping with a parachute from fixed objects. BASE is an acronym that stands for Building, Antenna, Span, and Earth. These are the four main objects we jump off. We use different gear for BASE jumping that is specially designed for BASE.

What would our advice be to new jumpers who aspire to get involved in BASE jumping?

I think the best advice for new jumpers would be to take your time! Don’t rush into BASE jumping. The minimum skydives you need is 200 but, waiting until you have 400-500 is obviously better. I see people now going out and rushing to get the 200 minimum just so they can start BASE jumping. They are missing out on the beauty of skydiving because they’re just trying to build up their numbers to 200. The longer you’re in the sport of skydiving the better your odds of becoming a good, safe BASE jumper are. Learn all aspects of skydiving, ie Crew Jumping, Formation Skydiving, Accuracy, and Rigging.

How do you prepare for a jump?

Preparation for a jump can vary widely on the object I’m jumping. Easier jumps such as a bridge (S) generally have less obstacles to worry about, whereas a Building or a cliff (E) are more technical. I always access any and all hazards, then I mentally go through potential problems, and how I will handle them so that I don’t have to think what to do, just react. I envision my jump from the moment I leave the edge, my flight pattern all the way to a soft landing

Some of my favourite places I’ve jumped would be Angel Falls in Venezuela which is the tallest waterfalls in the world. A hydro dam in a secret location was also one my most memorable, as well as the 3,000ft fjords of Norway, and the Skylon Tower in Niagara Falls. A couple jumps on my bucket list still is the Cave of Swallows in Mexico, the CN Tower in Toronto, and the Rogers Centre in Toronto. I would love to jump into Rogers Centre on Canada Day for a Toronto Blue Jays game and then throw in the first pitch. 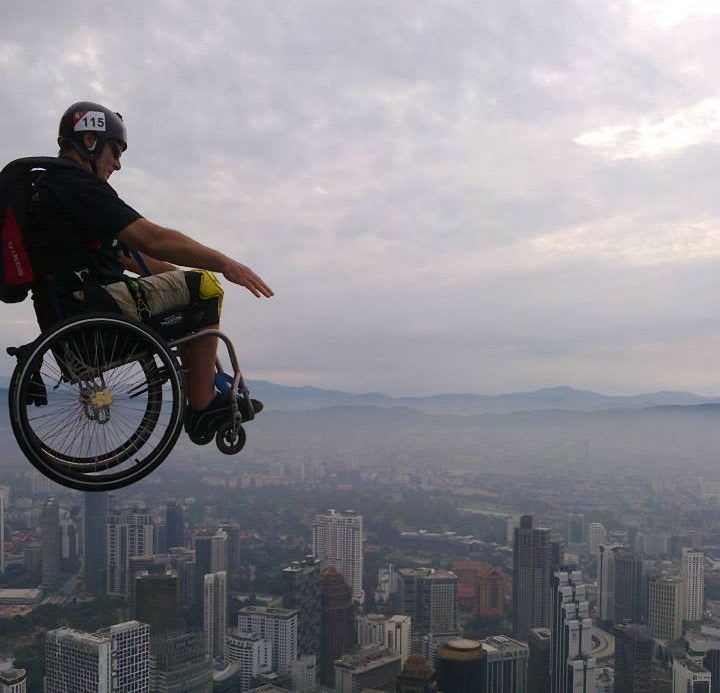 You are also a World Champion in the Para-Bobsleigh. What inspired you to get involved in the sport?

It all started when I was invited to be an endurance athlete for the Rick Hansen 25th Anniversary Relay. I wheeled from Winnipeg to Calgary (1,400km) in Jan-Feb. On my last day rolling into Calgary one of the medal bearers saw some videos of me that the relay were playing and came up to me and asked if I would like to give bobsleigh a try. I enrolled in the next pilot training school they had, and immediately fell in love with the sport. The sport has actually taken over more than my jumping in the past couple years.

What are some of your future goals in the Para-Bobsleigh?

My goal is to continue competing, help recruit new athletes into the sport, and represent Canada in the 2022 Paralympic Games in Beijing China. After that, I would like to become a coach for Para-Bobsleigh.

What drives you to constantly push the limits?

Pushing the limits and boundaries is something I’ve done my whole life. My mother use to talk about how I would scare the crap out of her from the age of 2! I was always that kid climbing to the tops of the trees, building ramps to jump over things on my bike, jumping off the roof of our house, off tall bridges into water, anything that would challenge me. It’s something I was born with and I think I’ll always be looking for challenges in life.

Who do you look up to? How do they inspire you in how you live your life?

I look up to anyone who lives their life with passion. I truly believe that everyone in this world should have a passion in life! No matter what that passion is, it could be hiking, golf, gardening, whatever! Just find your passion, and then pursue that passion and do it as much as you possibly can!

My next adventure will be in Montreal for an event called Jackalope. Myself and several other BASE jumpers will be jumping from the roof of the Olympic Stadium in front of thousands of spectators! After that I will be heading back to Calgary to begin training for the 2017-18 Para-Bobsleigh World Cup season, and 2018 World Championships. 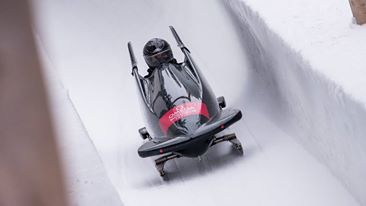 Lonnie is currently training for the Para-Bobsleigh World Cup and 2018 World Championships for Canada. He is looking for sponsors that he can partner with. His dedication and passion for the sport is infectious, and inspires us to live each day to the fullest. And, most importantly, to never give up on our dreams.