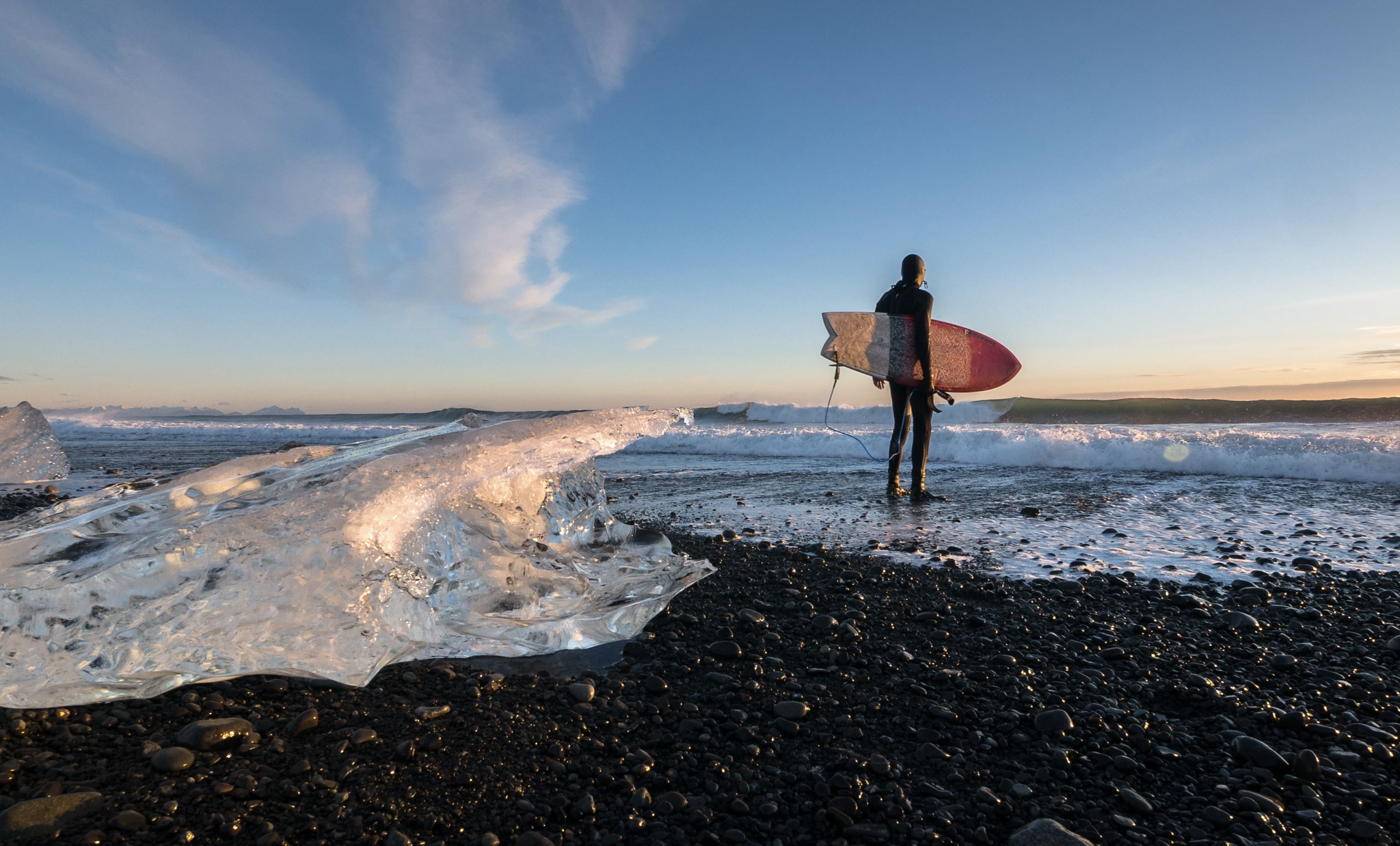 Around a year ago I drove to San Francisco through rain and rush hour traffic to see the premier of Under an Arctic Sky by acclaimed adventure photographer and videographer Chris Burkard. It was a few months before my trip to Iceland, and I had just began conceptualizing this adventure blog. I wanted some inspiration to take my photography, business and sense of adventure to the next level. The film was nothing short of inspiring. Upon leaving San Francisco I was motivated to push past my limits and conquer my goals, mentally, physically and artistically.

Flash-forward a few months: I contacted Tom Park through Instagram to be featured as one of our Featured Adventurers on our blog. I was blown away and seriously impressed by his underwater photography, set in the vibrant Great Barrier Reef. Over the months I have followed his journey, and once I saw the footage of him and his buddy surfing the frigid Arctic waters and chasing the Northern Lights, I knew I had to learn more.

What draws people to harsh, hostile and remote parts of the world? What inspires them to push past their limits and challenge themselves in ways they never thought possible? What happens after these feats are accomplished; are they changed in a positive way? Do they strive to push themselves further?

I had the incredible opportunity to talk to Tom about his two-week experience in Iceland, and I was left feeling inspired to go further in my own life. It’s passionate, imaginative and unique stories like these that reaffirm my desire to build this adventure network. I want these stories to leave people inspired and able to create the life of their dreams. I am sure this one will.

Can you tell us what inspired you to go on this journey?

Only very recently has surfing in the Arctic begun to make headlines, with the likes of Chris Burkard and Dane Renolyds recently releasing feature films about surfing in these harsh and hostile environments. The inspiration for our trip to far east Iceland stemmed from these films, where these surfers were placing themselves in the most remote corners of the world, in some of the harshest conditions all in the name of surfing. We were well aware that these were films made by some of the best surfers in the world, who are accustom to surfing in cold water, and that these surfers were backed by teams of professionals, medics and local guides. So in hindsight, the idea that myself and another Australian surfer, who have no experience surfing in cold water, and very limited experience even being in snow could tackle a task like this was fairly rash. Yet these films inspired us to challenge ourselves, to push ourselves to the limit, and to break past the preconception that surfing the Arctic Circle in the middle of winter was insufferable.

How accessible were the surf spots, and how did you decide on the locations?

Iceland is not your typical surf destination, it has a minuscule surf community which only extends along the Reykjavik peninsula and the surf breaks along this peninsula are local owned secrets. Due to the hostility of the ocean, the locals outside this peninsula rarely engage with ocean, and as a result there is not an established surf community and there is little to no information on good surf locations. Finding good surf spots is made even harder by the countries extremely unpredictable weather and unreliable swell forecasts. This makes planning a surf trip very difficult, and requires a lot of good luck. Thoroughly checking swell and wind forecasts became a daily ritual, this would allow us to find possible surf spots by comparing these reports to images of the Icelandic coast from google maps. This almost always resulted us driving from headland to headland along a stretch of coastline that we had deemed as ‘promising’ until we found a wave. Surprisingly, this worked far better than you would expect! Although, this was when the roads weren’t snowed over and impassable!

How would you describe surfing in the frigid waters of the Arctic?

The trip was aligned exactly 1 week before, and one week after the winter solstice, meaning these were the coldest and darkest two weeks in the Northern Hemisphere. With both of us growing up surfing the warm, crowded Sydney coastline, and having little to no experience surfing in cold water, we had no real idea what we had gotten ourselves involved in. We were expecting to face ice cold water and harsh conditions, but upon arrival it was immediately apparent that we were not prepared for the brutality of the Icelandic surf. We had set out unequipped and ill-prepared to surf some of the most barren, remote, and hostile waters we could have imagined. With water temperatures regularly below the freezing point, consistently hovering around minus 15 degrees Celsius accounting for wind chill, and beaches covered with layers of thick snow, the extent of the task we had set out to do was profoundly confronting. And this was when the conditions were good! The weather in Iceland is renowned for it’s split second ability to turn, delivering dangerous snowstorms and howling winds at a moments notice. When these storms hit, being caught in a wet wetsuit is quite frankly life threatening.

What were some of the obstacles you faced while filming?

If theres one thing harder than surfing the Arctic Circle, its probably surfing and trying to film it at the same time! It’s virtually impossible to operate a camera through any pair of gloves strong enough to withstand the Arctic in Winter, which means if you’re shooting anything, you’re doing it with an exposed hand! Expect to feel the bones in your finger ache and burn against the slightest sea breeze, and for your hand to be so cold that it cramps when you try press the shutter button. Shooting in the Arctic, particularly after getting out of the water… it’s really, really cold. However i think my cameras struggled even more than i did, in conditions as cold as we were in a fully charged battery will die in minutes. The GoPro we had for surf footage wouldn’t last more than 5 waves, and various controls on one of the Mirrorless DSLR’s we were using actually froze. To this day, the shutter speed dial is still frozen solid. Not having a shutter speed dial is a massive hit when you’re trying to produce professional footage and images! Luckily we had a spare camera body on the trip which managed to escape relatively unharmed. But don’t get me started on shooting anything post surfing, you can’t stop shaking and shivering! Any footage you tried to capture after a surf would inevitably be the shakiest, blurriest footage you’ve ever shot!

What were some of your favorite moments from those two weeks in Iceland?​

The best moment of the trip, and quite possibly my life, was this one surf in far-east Iceland. Access to the wave itself was incredible enough, requiring you to paddle out a channel lined by massive chunks of ice, surrounded by snow covered mountains, with the light blue glow of a huge glacier in the distance behind you. We were completely overcome by this immense feeling of awe, and all of a sudden the deathly cold water was no longer of any concern to us. The massive SUV sized icebergs were littered throughout the surf, stretching out past the back line where huge chunks of ice would be engulfed and thrown around by the larger sets. The act of dodging icebergs when flying down the line, or extending a bottom turn to avoid Titanic-like moments became a sport, and was quickly something we focused on far more intently than the act of surfing itself. The experience was simply unbelievable, and irrespective of the actual waves, it easily takes the top spot as the highlight of the trip, and the best surf I’ve ever had. Although, seeing a thousand kilogram ball of thick ice being picked up by a wave and hurled in your direction can be rather nerve racking.

Why would you recommend traveling to Iceland in the winter? Any tips for first-time travelers to the area?

Iceland was beautiful in winter. For starters there were no tourists, particularly outside of Reykjavik. So most of the attractions are completely empty! There was one morning where we had the whole Solheimasandur Plane Crash to ourselves for at least an hour. Iceland in winter is also far more extreme, you will face crazy snow storms and weather conditions that really give you an idea of what it’s like north of The Wall, not to mention the northern lights are almost exclusively a winter sight!

While I have no experience driving on ice, if you go to Iceland in winter make sure you are prepared for some dodgy driving encounters! The best attractions are usually hidden kilometres off the Ring Road, behind roads covered in thick ice or snow.

Where is your next epic adventure?

The next adventure is actually a surfers worst nightmare, swimming with massive wild Tiger Sharks in the Bahamas…. without a cage! It should be an incredible adventure!