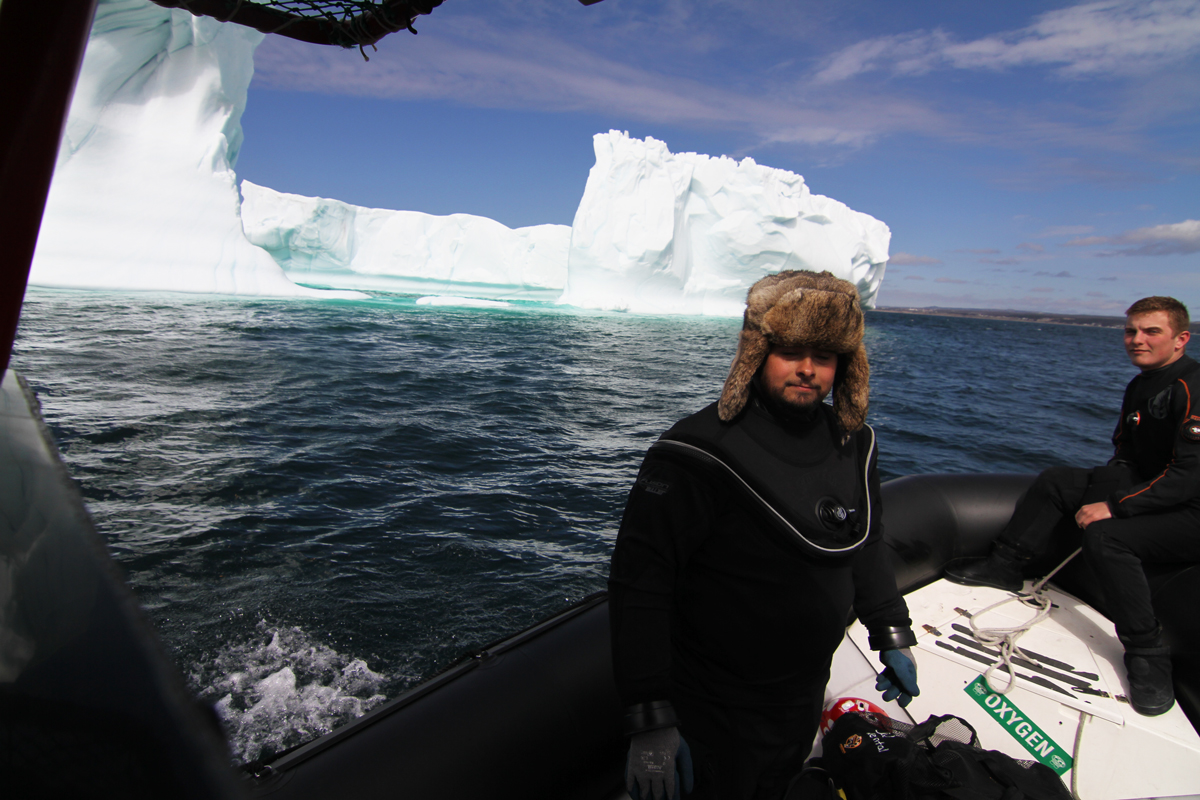 Learning About the Iceberg Dive

I was at a Borders book store one day and saw the magazine Scuba Diving: May 2010 edition. I had no idea that moment that this magazine would change my life. It had dives about all of these unique dives, like Bonne Terre Mine and Yellowstone Lake. I thought this was the coolest magazine that I’ve ever seen! Then I saw an article on Newfoundland, Canada. The writer dove the shipwrecks sank by Uboats, dove with the whale bones and dove the icebergs. I was hooked.

I knew this place was perfect for all of my diving goals. We saved up the money for a year to go see the icebergs. I would constantly check icebergfinder.com to see if the icebergs were present. They had not shown up yet, but it was time to go diving. I was hoping that they would show up. 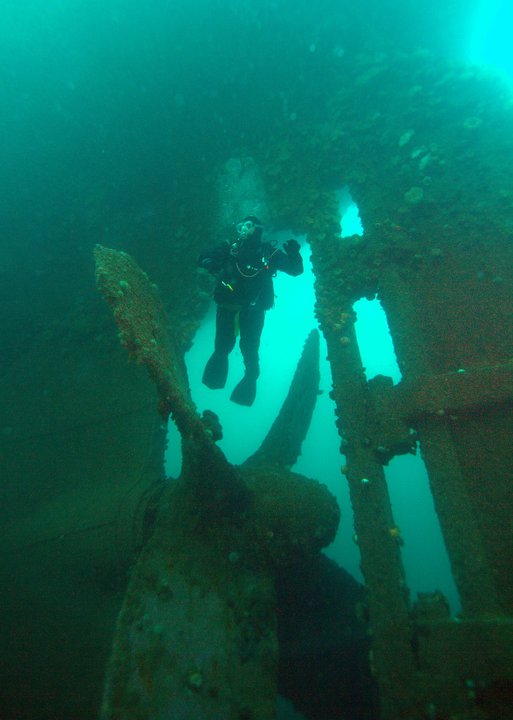 Amazing Diving, But No Icebergs For This Trip

Sadly the icebergs wouldn’t be showing up on this trip. I checked every day on their status and it wasn’t meant to be. However, the trip was far from being a bust. Ocean Quest Adventures has access to some of the greatest diving in the world. I’m actually shocked and disappointed this place is not on every top 10 must-dive places.

Ocean Quest Adventures started us on the PLM 27. It was one of four ships that was sunk by a Uboat. This was my wife’s first shipwreck. I told her “you will forget all the cold when you see the ship.” Which is a good thing, as the cold gives you an instant headache. We saw the boat’s silhouette, and the cold was forgotten immediately.

The ship had holes in it where you could go a little ways into it.  We saw unused bullets on the ship. The sea anemones and lump suckers made the ship their home. Rick Stanely, the owner of the operation, had us swim through the propeller and got photos for us.

The next shipwreck was the Saganaga. The torpedo that nailed it had such a nasty blast that the anchor flew up on top of the deck, and we got pictures with it. At the front of the ship, we got our Titanic pictures. It was a ton of fun.

The next dive was the SS Lord Strathcona. This ship was huge! It had tons of swim throughs and an old Marconi radio. It also has a toilet which appeared a bit cruel. It is a true relic of history. The drysuit doesn’t allow you to go to the restroom and there was a toilet that you badly needed. The consultation prize was the hot soup waiting for you on deck.

The next dive requires some explanation. The name of the next place is a great example of why you should never allow a teenager to name a place! The shipwrecks are located in Conception Bay and the dive site with the whale bones is called Dildo. It must be a happy place! Back in the day, they used to hunt whales and throw the bones into the pier. I look at this place as a place of honor. Luckily, they no longer hunt the whales. After jumping 15 feet off of the pier, we landed really close to a whale skull bone; It was unreal. Throughout the dive, we saw other whale bones too. Later we did another dive where they had retired the whaling boats.  It’s beautiful to see such a magnificent animal being protected now, and those ships retired.

After every dive we would go to the hot tub in our room, which was really nice after a great day of diving. We also had to watch U571 after seeing all of the World War 2 history underwater. 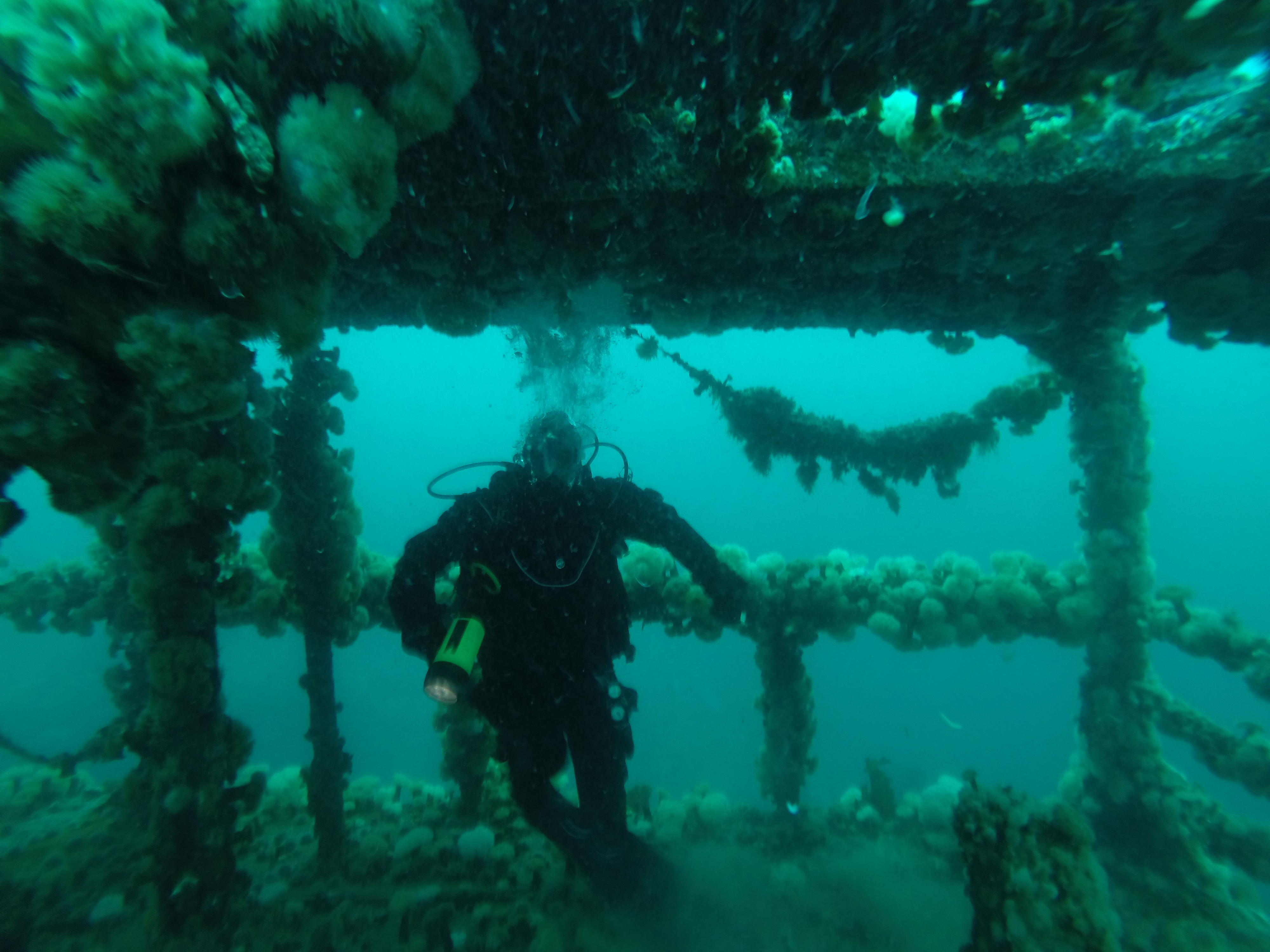 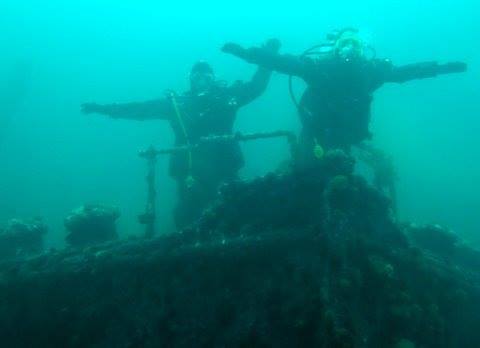 I was pretty devastated not getting to see the icebergs. Worse yet, is they showed up a week after we had left. In 2014 I got my second chance. I had stayed up late in May to prepare for a long family drive, but found out that they didn’t need me to drive. I decided that day I would fly to Canada, so I called Ocean Quest and they said come on over. I took a flight that very day. I was dead exhausted to say the least, as I got about two hours of sleep in two days.

Rick picked me up, and I rented all of my gear. I was tired, but also excited to finally see the icebergs. The weather was great.  Everything had lined up for me.

I got my gear ready, and we were at the berg. To my chagrin, I had forgotten my mask; I guess I should have slept more. Someone on the boat had an extra mask. Good luck like that is hard to come by! My first iceberg looked like a white swan floating in the ocean.The water was a light blue around the iceberg. Seeing this was much better than seeing my first shipwreck. I liken this experience to your first kiss, trying coffee for the first time, or getting a hug from one of your kids.

I jumped off the zodiac to swim the 30 feet to the iceberg. I had to wear a safety helmet because a piece of the berg can fall off at any moment. I saw tons of bumps all over the iceberg; it looked like little gold ball holes. I had to take my glove off to touch it to prove something like this exists. I thought, “what would happen if someone licked it?” I think A Christmas Story  should be all the proof that you shouldn’t do that. I went to 130 feet, and still I couldn’t see the bottom of the iceberg. It was massive, it was as big as my imagination.

My dive buddy took my BCD off of me. My GoPro was hooked to the strap of the BCD. That’s how my camera escaped; I was so tired, that I didn’t notice it floating away. Luckily, someone was taking pictures of the dive with another camera, so I ended up with photos to share when I told my stories. 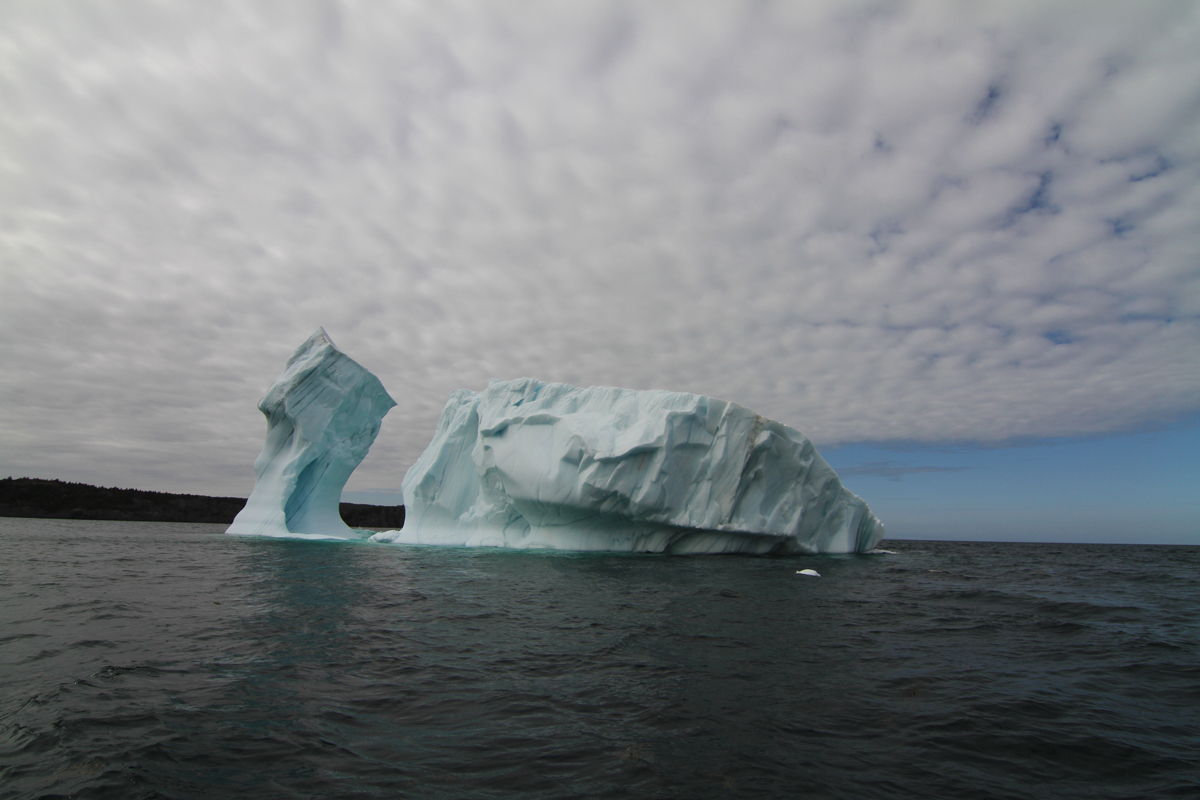 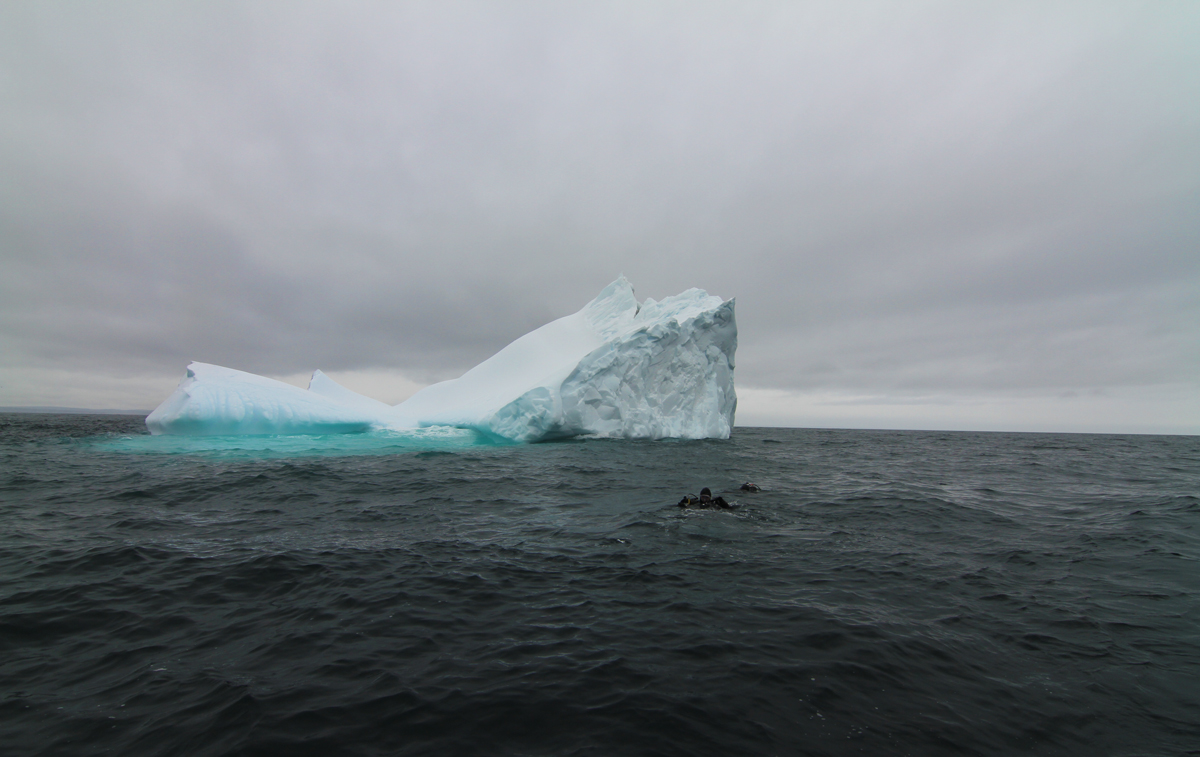 ​The second day’s weather was a little rough. It was snowing, but we still made the trek to a new berg. I loved the feeling of the snow and rain on my face; it also chilled my head enough that I didn’t get an iceberg headache. I was told to keep my diving to 60 feet, but I went to the berg and sank to 80 feet. I found out the bumps were caused by the freshwater in the iceberg. The saltwater pushes the freshwater up a column. Because of that, near the iceberg is pure freshwater. I was weighted for saltwater and that is why I sank so fast, but I say it was kind of fun to do it that way.

The top of this iceberg looked like a mountain. Down below like a skyscraper made of ice. The water was so blue, I had to touch it with my bare hand again. The iceberg dives are not for beginner divers, as you want about 100 dives in your log. It is an open water dive. The iceberg can flip at any moment. There isn’t an anchor line to a boat. You have to descend and ascend carefully.

We gathered a bunch of the iceberg ice. It is the best ice for drinking soda. The ice has bubbles coming from it. I even melted some of the ice and put it in a bottle, as I keep water from everywhere I go.

The first trip to the bergs the weather was perfect, and everything looked good but they didn’t show up.  The second time I had no sleep, the weather was rough, I forgot my mask and faced other challenges but I got to reach my goal. It’s a lot like life. When things are the toughest, that usually means that something great is about to happen. I tell people the best things in my life happen in the rain and snow. 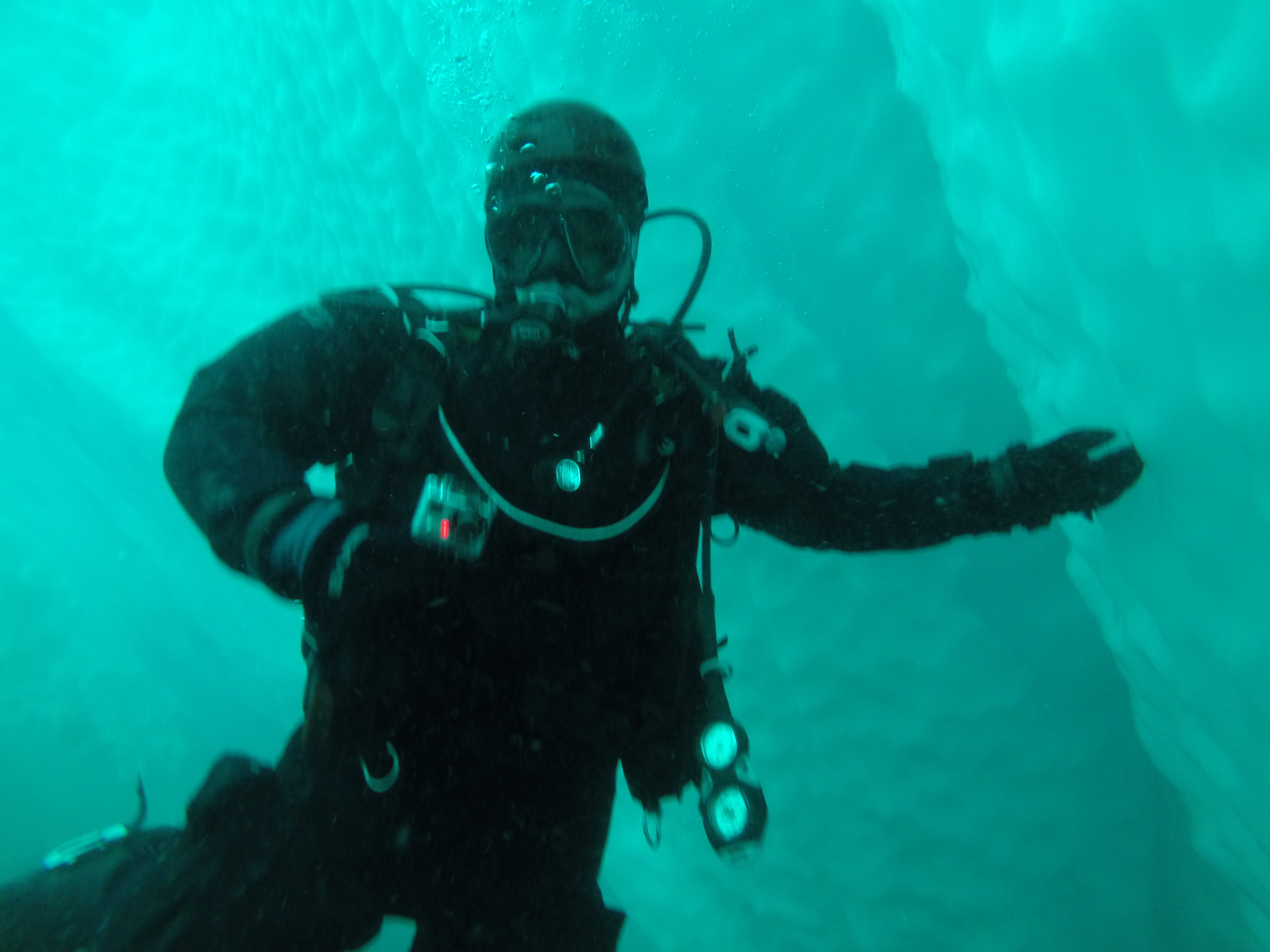 Why I Loved Newfoundland

People from Newfoundland are the kindest people on earth. I kid you not. We had one couple who invited us over to their house for grilled cheese sandwiches and playing Dr. Mario. Later their landlord was coming, so we helped them clean up their place. They gave us salmon as a thank you.

We had another couple take us to the world’s best fish and chips. (It’s actually third best, but I won’t tell if you don’t. The best is from Iceland that you caught off of the boat.) The food was amazing, and afterwards they took us to Signal Hill so that we could enjoy their history.

The owners made us steak and anything with moose to keep us happy. He also took us on a free tour of kayaking with a journalist. It is a different world down there; it’s hard to believe a place like this exists. 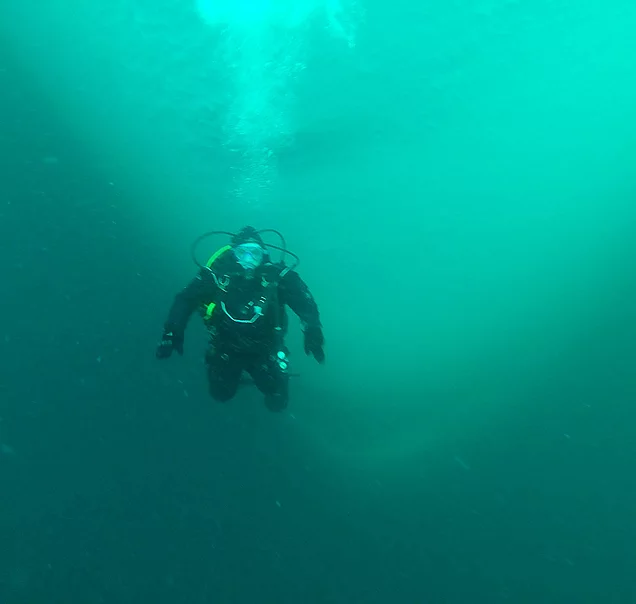